This morning’s Bureau of Labor Statistics Employment Situation Summary, with two published projections of 160,000 additional jobs and one with the 3.5% unemployment rate going unchanged, was supposed to be a little bit better than lukewarm.  The results came in a little bit worse than that.

We got 145,000 net new nonfarm payroll positions, 5,000 to 15,000 more than our population increase absorbed, and indeed seasonally adjusted joblessness held at 3.5%.  The other numbers didn’t do much of note either.  The total number of unemployed, 5.8 million, stayed the same, as did the count of those out for 12 months or longer (1.2 million) and the two measures of how common it is for Americans to be working, the labor force participation rate (63.2%) and the employment-population ratio (61.0%).  Unadjusted unemployment went up expectedly with the season from 3.3% to 3.4%.  Average hourly private nonfarm payroll earnings fell short of inflation, with a 3-cent rise to $28.32.  The only clear piece of good news came from the number of those working part-time for economic reasons, or holding on to shorter-hours positions while looking thus far unsuccessfully for full-time ones, with a second straight monthly decrease, down 200,000 to 4.1 million.

The American Job Shortage Number, the metric showing how many more opportunities could be quickly filled if all understood they would be easy to get, rounded for its third straight month to 15.0 million, as follows: 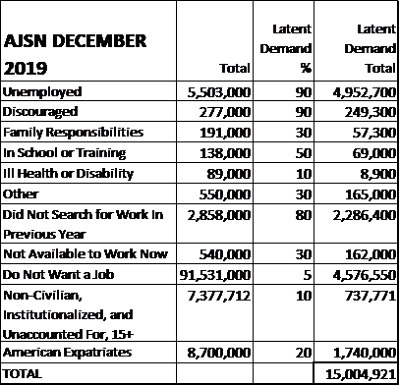 Compared with a year before the AJSN has improved over 800,000, with over half of that from lower official unemployment, but almost 200,000 from fewer people expressing interest but not looking for a year or more, almost 100,000 from those discouraged, and a surprising 54,000 from fewer people in school or training.  The share of the AJSN from those officially jobless went up 0.4% to 33.0%.  Since December 2018 the front-line BLS numbers are all substantially better, with long-term unemployed down 100,000, total unemployed off 500 000, those working part-time for economic reasons now 600,000 fewer, adjusted unemployment down 0.4%, unadjusted unemployment down 0.3%, the labor force participation rate up 0.1%, and the employment-population ratio 0.4% higher.  The 84-cent wage increase, or 3.0% for the year, was slightly more than inflation.

How did we do?  That’s easy to answer – we didn’t do anything.  We are now, though at a good high level, at an employment plateau.  Where we will go from here isn’t clear, but for now we aren’t going anywhere.  The turtle didn’t budge.

Posted by James B. Huntington at 6:25 AM