April Jobs Data: A Fine Month, With the American Job Shortage Number (AJSN) Down Almost 900,000 to 15.2 Million, But Ordinary Behind the Front-Line Numbers

In advance of this morning’s Bureau of Labor Statistics Employment Situation Summary, Fox News predicted 185,000 more jobs.  Once again, we blew the projection away.

We added 263,000 net new nonfarm positions, and as a kicker, got a 49-year low in the adjusted employment rate, down 0.2% to 3.6%.  The adjusted version, showing that April might have the most people working year-in and year-out, was even more remarkable, reaching 3.3%.  After that, though, results were mixed.  The number of unemployed fell almost 400,000 to 5.8 million, with those out 27 weeks or longer down 100,000 to 1.2 million, but hourly private nonfarm payroll wages were only barely above inflation, up 7 cents per hour to $27.77.  The two numbers showing how common it is for Americans to be working, the labor force participation rate and the employment-population ratio, did not follow the headline results either, with the first actually down 0.2%, a substantial amount for this metric, to 62.8%, and the second unchanged at 60.6%.  Most disappointing was the count of those working part-time for economic reasons, or holding on to less than full-time positions while thus far unsuccessfully seeking longer-hour ones, which repeated March’s 200,000 worsening and is now at 4.7 million.

The American Job Shortage Number or AJSN, the statistic showing in one figure how many additional positions could be rapidly filled if all knew that getting work were easy, improved 876,000 over March’s to at least a 10-year low, as follows: 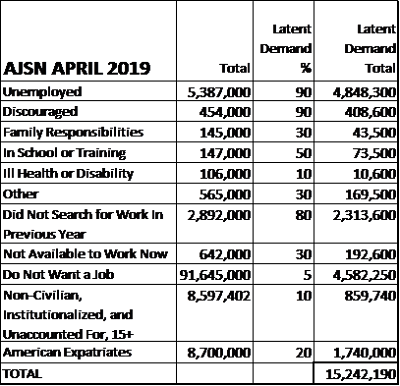 The difference from March was completely due to lower official unemployment, which now makes up only 31.8% of latent demand.  In sum, the other numbers above essentially broke even, with the count of those wanting to work but not looking for it for a year or more showing a 133,000 improvement, but offset by rises in those describing themselves as discouraged, temporarily unavailable, and claiming no job interest at all.  Compared with a year before, the AJSN’s improvement was not as extreme, 563,000 lower and better but 87% from reduced official joblessness.

Some reports will call this morning’s employment data spectacular and a massive improvement, but here are some reasons why it is neither.  First, though the number of new positions was once again superb, the cuts in the jobless rates seem to come mostly from fewer people pursuing them, as over 600,000 net moved into the no-interest category.  Second, the 4.7 million counted everywhere as working but unhappily doing that less than full time are now within 700,000 of those officially unemployed.  Third, the marginal attachment categories above have lacked real progress for years.  Fourth, our tepid wage improvements, along with the lower but hardly crashing AJSN, put the lie to statements that we have a worker shortage.  Yes, this April was a favorable employment month, but the turtle’s moderate if significant step forward by no means made him look like a cheetah.

Posted by James B. Huntington at 6:47 AM