Expectations for this morning’s Bureau of Labor Statistics Employment Situation Summary, if the identical-to-April Fox News projection of 185,000 net new nonfarm positions is a good indicator, were much the same as last time.  However, the results weren’t.  We gained only 75,000, and, while the other numbers maintained strength they didn’t improve as a group.  The front-line seasonally adjusted unemployment rate stayed at 3.6%, with the unadjusted one up 0.1% to 3.4%.  We had 5.9 million unemployed persons, with those out for 27 weeks or longer up 100,000 to 1.3 million.  The count of those working part-time for economic reasons, or seeking full-time positions while keeping smaller-hours ones, fell 300,000 to 4.4 million, reversing last month’s 200,000 worsening and then some.  The two measures of how common it is for Americans to actually be working, the labor force participation rate and the employment-population ratio, stayed the same at 62.8% and 60.6%.  Private nonfarm payroll wages matched the last result, gaining 6 cents per hour, a bit more than the latest, 2.0%, annual inflation rate, to reach $27.83.

The American Job Shortage Number or AJSN, the measure showing how many additional positions could be quickly filled if getting one were as easy as getting a pizza, gained 357,000, as follows: 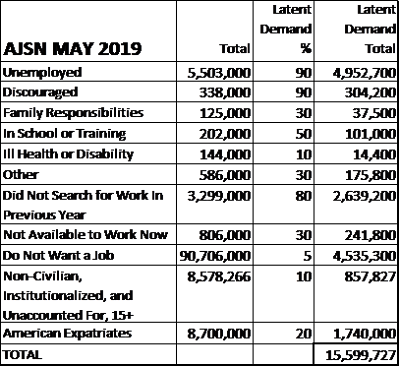 Compared with April, changes in those unemployed and discouraged exactly cancelled out, leaving almost the entire variation to those saying they wanted to work but did not look for it in the past year, up over 400,000 with an AJSN effect of 325,000.  The number of people claiming no interest in jobs fell almost one million – that only cut the AJSN by 50,000, but showed us once again that membership for many in that category is fluid and negotiable.  That was almost exactly offset by the 164,000 rise in those wanting to work but being temporarily unavailable.  Year-over-year, the AJSN improved 340,000, with two-thirds of that from lower official unemployment and the rest from shrinkage in five other groups.  The share of the AJSN from unemployment as the BLS defines it reached another long-term low with 31.7%.

How did this month look?  Not terrible but hardly good.  Let’s call it sluggish.  The two participation ratios, one of which worsened 0.2% in April, did not bounce back and are still, fine employment times notwithstanding, about half a recession from reaching new post-1977 lows.  We can take the poor, well-below-population-increase-requiring net jobs gain, and the other metrics here are still generally looking good, but those are due to previous months, not May 2019.  Accordingly, the turtle stayed just where he was.

Posted by James B. Huntington at 6:21 AM