Friday AM: Some Jobs Numbers Still Improving, Some Advances Reversed, and AJSN Down 200,000 To 16.2 Million

This morning’s Bureau of Labor Statistics Employment Situation Summary was another mixed bag.  The headline number of net new nonfarm positions didn’t make its published 158,000 projection and turned in 130,000, close to what we need to cover population increase.  Seasonally adjusted unemployment remained, for the third straight month, at 3.7%.  The unadjusted version dropped 0.2%, mostly due to the typical difference between July and August, to 3.8%.  The adjusted number of jobless people fell 100,000 to 6.0 million, with those out for 27 weeks or longer holding at 1.2% and those working part-time for economic reasons, or working short-hours jobs while seeking thus far unsuccessfully full-time ones, gave up its June and July improvements and is now back at 4.4 million.  The two measures showing how common it is for Americans to be working, the labor force participation rate and the employment-population ratio, each gained 0.2%, with the former having its third straight improvement, to reach 63.2% and 60.9% respectively.  After a neutral month, average private nonfarm hourly wages came in at 13 cents more per hour than the previously announced result, and are now at $28.11.

The American Job Shortage Number or AJSN, the Royal Flush Press metric showing how many additional positions could be quickly filled if all knew that getting one would be routine and easy, went down 207,000, as follows: 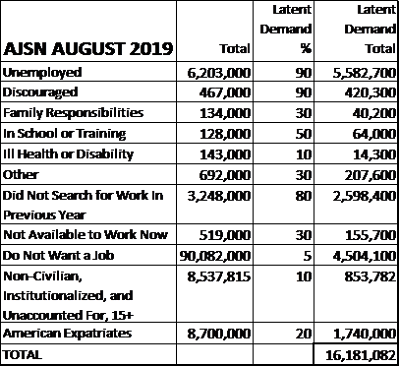 The largest AJSN changes over July were those unemployed, cutting 317,000 from the total, followed by those discouraged and not wanting work at all, offsetting much of that with worsenings of 89,000 and 54,000.  The share of latent demand from those officially jobless fell to 34.5%, matching May’s outcome.

Overall, how did we do?  The net effect was modest, with some measures, specifically the employment-population ratio and the labor force participation rate, continuing to improve, and others, such as the count of those working part-time for economic reasons, losing what I had hoped were sturdier gains.  With better results so common, the lukewarm – and that’s what it is, not the likes of “poor” or “skimpy” – 130,000 jobs gain is no cause for concern.  As there is so much latent demand, the wage improvement is nothing to take for granted.  We’ll continue to track the trends, and see which are real and which, as most of them these days, are only fluctuations.  In the meantime, though, the turtle took a tiny but real step forward.

Posted by James B. Huntington at 6:25 AM