At first glance, this morning’s Bureau of Labor Statistics Employment Situation Summary looked as expected.  The number of net new nonfarm positions couldn’t have been much closer to a published consensus 140,000 projection with 136,000, and other changes seemed small.  Yet beyond that, which roughly matched American population growth, this September report was deceptively good.

Although the official joblessness rate has been overrated for most of the past half-century, it still means something, and its 3.5% adjusted result was the lowest in almost 50 years.  The unadjusted 3.3%, lower since September is an above-average month for people working, was much the same.  We’re now at 5.8 million unemployed (5.465 million unadjusted), and the two measures of how common it is for Americans to have jobs, the labor force participation rate and the employment-population ratio, did fine also, given that they each gained 0.2% in August, by staying at 63.2% and rising 0.1% to 61.0% respectively.

There was bad news as well.  The count of people out of work for 27 weeks or longer gained 100,000 to reach 1.3 million.  The number of those working part-time for economic reasons, or holding on to short-hours positions while unsuccessfully seeking a full-time proposition, held at 4.4 million, but did not lose back any of its 400,000 August gain.  Average private nonfarm payroll earnings, after rising a good but unspectacular 11 cents per hour last time, lost 2 cents and are now at $28.09.  This number has been outperforming inflation, but one more like month will push it down to constant-dollar breakeven for the year.
The American Job Shortage Number or AJSN, the measure showing how many more positions could be quickly filled if all knew they were easy to get, lost and thereby improved a stunning 1.08 million, some but not all seasonal (the AJSN is unadjusted), reaching a 17-year low as follows: 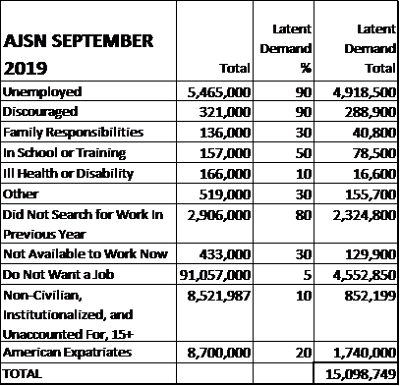 Over 60% of that was from lower official unemployment, but more than 400,000 was cut elsewhere, mainly from those wanting to work but not looking for it for the previous year (a 273,000 net latent demand drop), and those calling themselves discouraged (131,400 down).  Compared with a year before, the AJSN is down over 500,000, over half from reduced unemployment and the rest spread out among 8 of the 9 other categories above, all of which have fewer people than in September 2018.  The share of the AJSN coming from those in the main jobless category is now 32.6%, once again below one-third and the lowest since May.  Latent employment demand from those claiming no interest in work is now less than 8% below that from official unemployment, and if the latter keeps dropping the two could converge.

How do we evaluate September?  The number of new jobs was lukewarm again, and the loss in wages sad, but I like the other-category improvement too much to call it bad.  Not great by any means, and maybe not even encouraging, but we’re still advancing.  Maybe we’re going to get a recession within the next several months, but real signs of that in this report are absent.  Small again, but the turtle yet again took a step forward.

Posted by James B. Huntington at 6:31 AM