On the Eve of the Coronavirus Crash a Fine Month for Jobs, With Latent Demand Down 370,000 to 15.9 Million

The employment situation has faltered over the past two weeks – all we don’t know is how much.  For now, though, we have our report on how things were about three weeks ago.  Per this morning’s Bureau of Labor Statistics, we have, as a nation, little to complain about.

The strength of February’s data started with the two marquee numbers.  We added a superb 273,000 net new nonfarm positions, which makes only a hair short of a half million for the first two 2020 months.  Seasonally adjusted unemployment dropped 0.1% to 3.5%, with the unadjusted version, showing that February is a below average month for people working, down 0.2% to 3.8%.  The number of unemployed lost 100,000 to 5.8 million, with those out for 27 weeks or longer down the same to 1.1 million.  The two measures of how common it is for Americans to be working or officially jobless, the labor force participation rate and the employment-population ratio, held and shed 0.1% respectively and are now at 63.4% and 61.1%.  Those working part-time for economic reasons, or holding on to less-hours jobs while thus far unsuccessfully seeking full-time ones, though, matched last time’s 100,000 gain to reach 4.3 million.  Average hourly private nonfarm earnings rose 8 cents per hour, about the inflation rate, to get to $28.52.

The American Job Shortage Number or AJSN, the gauge of how many more positions could be filled if all knew that getting one was as easy as getting a pizza, fell over one third of a million, as follows: 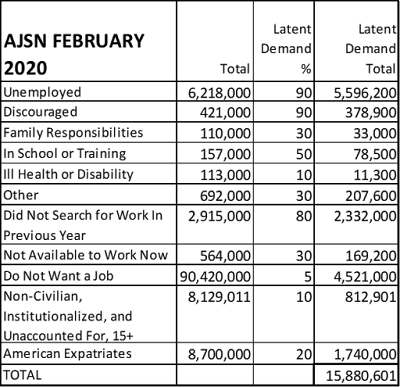 Two-thirds of these improvements came from reduced official employment, one third from a lower count of those wanting work but not looking for the past year, and the other categories above collectively broke even.  The share of the AJSN coming from those officially jobless went down from 36.0% to 35.2%.  Compared with a year before, the AJSN is 626,000 lower, nearly all from official unemployment and those not looking for a year or more.

So, how good was February’s data?  Considerably.  With our population up only 108,000, that 273,000 net new jobs was quite an achievement.  People are again leaving what might be called the hiding-place statuses above and rejoining the labor force.  We’ll check out the damage report in a month, but in the meantime the turtle took a substantial step forward.

Posted by James B. Huntington at 6:33 AM