This morning’s Bureau of Labor Statistics Employment Situation Summary should surprise no one, with the only suspense the exact length of the drop.  We’re worse now, which is 26 days after the final survey date used here, but it still documents the first part of the American coronavirus economic plunge.

As of April 12th, we had lost 20.5 million nonfarm payroll positions, with adjusted joblessness 14.7% (unadjusted 14.4%).  There were 23.1 million unemployed Americans, up 16.0 million from mid-March.  The unaffected count of those out for 27 weeks or longer improved, losing over 200,000 to 939,000, and average private nonfarm earnings, warped by the loss of massive numbers of lower-paying jobs, gained $1.39 to $30.01.  From there, though, everything was bad.  There were 10.9 million people working part-time for economic reasons, or keeping shorter-hours positions while unsuccessfully seeking full-time ones, up 5.1 million.  The two measures showing best how common it is for Americans to be working or one step away from it, the labor force participation rate and the employment-population ratio, fell 2.5% to 60.2% and 8.7% to 51.3% – these figures are the lowest, respectively, since January 1973 and before January 1948.

The American Job Shortage Number or AJSN reached an all-time peak by gaining 16.9 million, as follows: 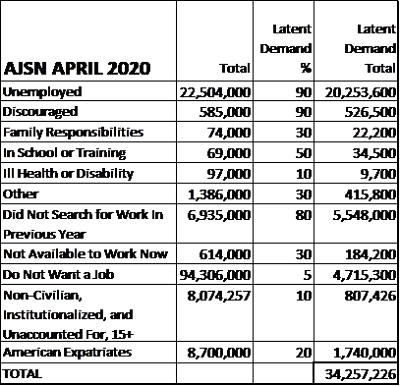 Over 80% of this increase is from higher official unemployment.  A similar share of the rest came from people wanting work but not looking for it for a year or more, with the number of people reporting this status more than doubling from 3.3 million.  The number of those saying they were not interested in work rose 2.3 million, understandable for those in fields expected to employ few over at least the next several months.  The share of latent demand from those in the Unemployed category is now 59.1%, up from March’s 38.3%.

Compared with a year ago, the AJSN is up 125%, with almost all of that from the two statuses contributing heaviest to April’s jump.

Yes, this is terrible, and right now we are probably over 20% officially jobless.  As we level off, this data will better match the true release-date status, but for now only shows territory we have been through.  Be aware, though, that the above counts have no distortion from those not successfully filing for unemployment, as they are from personal and company surveys.  As for the turtle, someone picked him up and took him a long way back.

Posted by James B. Huntington at 6:45 AM