When the paragraph introducing this morning’s Employment Situation Summary popped up at its usual 8:30 on the Bureau of Labor Statistics site, I thought I was reading the wrong thing.  Here we were, expecting something like the published projections of 7 million more jobs gone and 19.8% unemployment, and both actually improved.

Per the document, we gained 2.5 million net new nonfarm positions, compared with April’s 20.5 million loss, and seasonally adjusted joblessness is down 1.4% to 13.3%.  Most other numbers followed the modest but significant improvement, with the labor force participation rate up 0.6% to 60.8% and the employment-population ratio rising 1.5% to 52.8%.  The count of people working part-time for economic reasons, or holding on to less than full-time work while seeking that, shed 300,000 to 10.6 million, and average private payroll nonfarm hourly wages fell 26 cents, no doubt due to more low-paying jobs being actually or allegedly reinstated, to $29.75.  The number of those unemployed for 27 weeks or longer, almost irrelevant to the current situation, gained almost 300,000 to return to March’s 1.2 million.  Unadjusted joblessness matched the adjusted version by losing 1.4% and came in at 13.0%.

The American Job Shortage Number or AJSN, the metric showing how many currently unavailable positions could be quickly filled if all knew they were out there, lost 2.2 million from April’s all-time record, as follows: 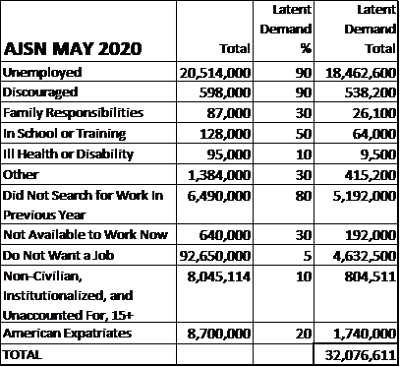 All but 400,000 of this upturn is from lower official unemployment, with almost all the rest from fewer people wanting to work but not looking for it for a year or more.  Compared with May 2019, the AJSN has gained 16.5 million, most from huge increases in these same two categories.

What happened?  The notes with the BLS numbers gave several possible reasons:  replacement of surveying at their regional data collection centers with more phone use, a 67% household survey response rate down from about 82% before coronavirus’s effect, and a possibility of confusion from workers still technically employed but “absent from their jobs” along with classification mistakes on people with other gray-area work statuses.  It seems certain that if complete lack of pay would make workers on payrolls officially unemployed, the rate would be far higher, and might indeed be roughly 20%.  As a result, “BLS and the Census Bureau are investigating why this misclassification error continues to occur and are taking additional steps to address this issue.”  We can only hope this is not a political scandal.

Accordingly, this data is not only obsolete, as was the case for the last two versions, but severely in error.  There is a good chance the BLS will issue a correction or at least a corrective estimate, and reopenings may have made 13.3% a reasonable estimate for today, but in the meantime, the turtle went backward, not forward.

Posted by James B. Huntington at 6:39 AM