Driverless Cars – In the Metal!

Eight days ago I sought out and visited Chandler, Arizona.  With 65 square miles and over a quarter million people, that Phoenix satellite is one of the newer huge suburbs, such as Henderson, Nevada and Plano, Texas, which grew by expanding into unincorporated land while adding few features of standalone cities.  It seemed like a fine place to live, but why go there?

The answer, which regular readers of this blog may have suspected even before reading today’s headline, is that Chandler has become perhaps the most important place for the real-life road-testing of autonomous vehicles.  I had known they were common there, but despite writing tens of thousands of words on that subject had never actually seen one.  But now I have.  So you yourself don’t need to try to photograph moving cars from other ones, I chased them around and shot them on my trusty Canon, and returned with the following 13 things to say.

First, in about an hour’s searching I saw 8 to 10 autonomous Waymo vehicles, all moving, and which could have included duplicates.  Second, two seemed to be on courses, making the same sequence of turns.  Three, each had one or two on-board safety drivers, and one I got next to also had a, rather bored-looking, back seat passenger.

Four, the cars acted normally in traffic and actually exceeded the conservative posted speed limits a bit; I almost lost one when it went over 50 for almost a mile in a 45 zone.  Five, most of the vehicle tops had cylinder-shaped rooftop Lidar devices, though some had extra thick flat tops.  Six, all were white sort of small, longish SUVs with the faint turquoise Waymo name.  Seven, I saw not a single out-of-the-ordinary reaction, including jeers or vandalism attempts, from other drivers or pedestrians – all acted as if the vehicles were nothing special at all.

Eighth, I talked with (actually at) two safety drivers, encouraging them and acknowledging that while I was being a pest I was on their side – they, men in their 20s or around 30, seemed cheerful, sober sorts.  Ninth, Chandler did look new and prosperous, with streets all in excellent condition.  Tenth, at a sunny or slightly cloudy 80 that afternoon the weather was perfect.

Eleventh, Chandler’s larger roads followed a clear grid pattern, but others, often running through subdivisions, wiggled around.  I saw two expressways, one on the western border and another going through the middle of town, with orderly exit patterns.  Twelfth, except for one where the safety driver was using the wheel to back out of a parking space, I could not tell when the cars were in autonomous mode.

Thirteenth, we can contrast the unobtrusiveness of these vehicles with the fuss the horseless carriages made in their early appearances over 100 years ago.  The equivalent of the Clancy Brothers singing that “you could hear the din all through Glenfin of Johnston’s motor car” will not happen this time.  After a while, we will not notice them – and that is the way that should be.

Here are the photos: 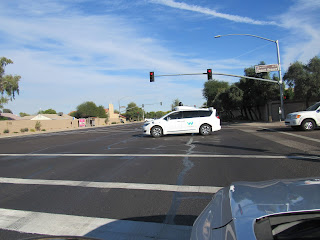 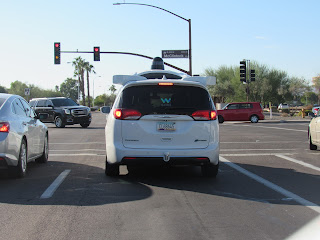 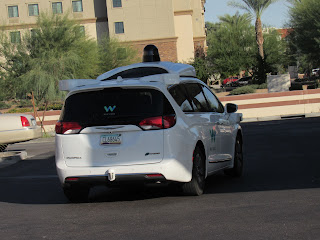 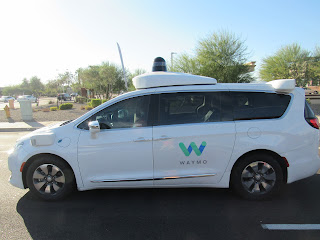 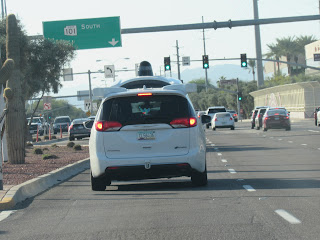 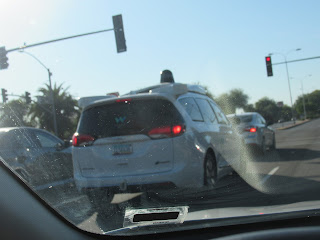 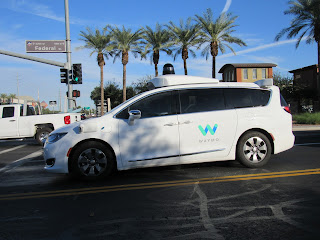 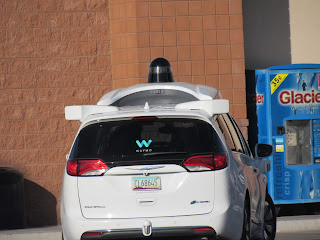 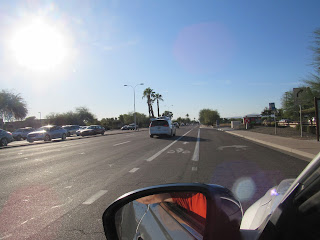