This morning’s Bureau of Labor Statistics Employment Situation Summary was supposed to be a stinker, or at least only somewhat unfavorable.  Did that happen?

I saw four forecasts of the recent-marquee number of net new nonfarm positions, all lower than last month’s.  The result beat them all.  Instead of from 75,000 to 125,000 we had 128,000, not impressive but about enough to cover population growth.  Elsewhere, significant results were few.  The seasonally adjusted number of unemployed gained 100,000, offset by the labor force participation rate up 0.1%.  Official adjusted unemployment rose 0.1% to 3.6%.  Wages gained 9 cents per hour over September’s first report, which was later revised slightly upwards leaving us with a 6-cent October rise, just about inflation, to $28.18.  The others on which I have been reporting, the unadjusted jobless rate (3.3%), the count of people in that category for 27 weeks or longer (1.3 million), the employment-population ratio (61.0%), and those working part-time for economic reasons, or keeping such positions while thus far unsuccessfully seeking a full-time one (4.4 million), all broke even.

The American Job Shortage Number or AJSN, the metric showing how many more positions could be quickly filled if getting one were as easy as getting a pizza, reached another multiyear low, but it was close – it improved only almost 100,000, as follows: 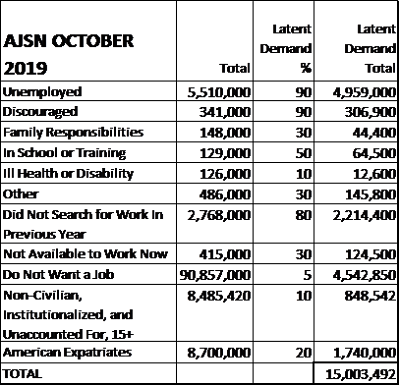 The largest change was from a 138,000 improvement in the number of people claiming interest in working but not looking for a year or more.  The 45,000 increase in those unemployed offset that by 40,500, and changes beyond that were all 18,000 or lower.  The share of the AJSN from people officially jobless gained a little bit to 33.1%, still under one-third.

Compared with a year before, the AJSN is still getting better.  October 2018’s result was 700,000 higher at 15.7 million, almost all due to higher unemployment, more not searching for a year or longer, and a rise in those calling themselves discouraged.

How did we do overall?  The good news is that this was not the down month many expected.  The bad news is that we didn’t go anywhere positive either.  There is still no sign of recession here, but although I saw the turtle move his knee, he stayed right where he was.