By the pandemic’s standards, it’s been a peaceful United States and world week.  The chart for the latter changed little, but the role-model countries of New Zealand and South Korea had small if discouraging relapses.  There are now a huge variety of graph shapes, ranging from many with high pinnacles early on followed by minimal cases since, to another group with skateboard-park curves going up, down, then up again.  Here is the American one, which is unique: 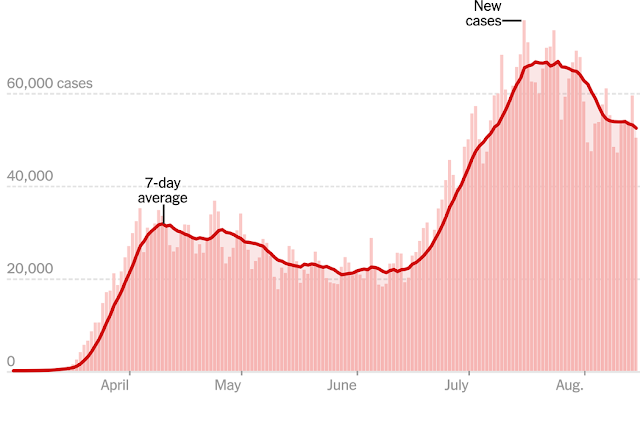 The story this August 20th New York Times chart tells is clear.  We went up as expected, then decreased only slowly as many people resumed risky activities too quickly.  That resulted in a second climb to double the previous peak, and has been slowly drifting down, as there has been only uneven practice of prudence and patience since.

In other news, we’re back over one million weekly jobless claims (The Washington Post, August 20th); “Trump’s extra $300 unemployment benefits may only last 3 weeks – here’s why” (because they are taken from FEMA funding, a fixed pot of $44 billion – Fox Business, August 18th); “Amazon reportedly looking to transform shuttered JCPenney, Sears stores into fulfillment centers (a suitable retrofit for the times – Fox Business, August 9th); and “Consumer prices jump again in July, rebounding from pandemic lows, but inflation remains low” (because money is continuing to pool up – MarketWatch, August 12th).

We’re getting more discussion on what our country will be like after the pandemic is over.  You can expect a lot from me on that in the next few months, as I’m reading a groundbreaking book on social and political inflection points that author George Friedman expected to hit this decade even before Covid-19 appeared, and will have plenty of conclusions of my own for your consideration.  In the meantime, we have “The Workforce Is About to Change Dramatically,” by Derek Thompson on August 6th in The Atlantic, which took a remarkably wide scope, with three major predictions and much information in and around them.

His first, “The “Telepresence” Revolution Will Reshape the U.S. Workforce,” names the at least temporary ending of two decades of large spending on “leisure and hospitality,” caused by reduced business travel and commuting-connected eating, drinking, and shopping.  Yet a lot of that will come back in smaller and relocated form, as people not only leave larger cities but do those things closer to their homes.  When the author said that “face-to-face meetings might even feel more valuable in a post-pandemic world,” he brushed up against my 2000 prediction, still waiting for widespread fulfillment, that in-person activities would come to be valued more than electronic ones.  Overall, while it is easy to say that “telepresence will almost certainly increase in the aftermath of this crisis,” its problems, starting with productivity losses from less motivated workers and moving on to uneven and often inadequate home-office settings and resources, have not gone away.

Thompson’s second prediction was “Remote Work Will Increase Free-Agent Entrepreneurship,” including employees having new “emotional relationships with colleagues” as “many white-collar companies have become virtual group chats punctuated by Zooms,” problematic since “online communications can be a minefield for mutual understanding.”  That takes coworkers out of their special category, since “at the kitchen counter, hunched over your computer, you are as close to the people and communities on LinkedIn, Twitter, and Instagram as you are to the Slack messages and chats of your bosses and colleagues.”  Accordingly, “more Americans may take on side gigs and even start their own companies,” as they want to profit from being alone.  Against that, companies, in the footsteps of IBM and Yahoo, may rush back to offices once the threat of the virus is way down, with the variation in home work caused, as it was in the past few decades, by the choices of employers, some of whom “were, just seven months ago, outfitting their offices with the finest sushi bars, yoga rooms, and massage rooms.”

Third, “A Superstar-City Exodus Will Reshape American Politics.”  The author’s idea there was that Democrats might become less concentrated in large cities and on the coasts, leading to less of a gap between electoral-college and popular-vote outcomes.  I suspect this won’t have that effect, since most movements will be made either within states, to neighboring ones with similar political tendencies (for example, New Jersey or Connecticut instead of New York City), or to already solid-blue college towns.  For this prediction to come through, telework would need to be common enough that people would not care where they lived, even after anticipating possibly needing to be rehired, and would actually move into states with generally opposite political currents.

In all three of these outcomes, Thompson acknowledged that a vaccine being distributed early next year could blunt them.  “Still, even a moderate increase in remote work could lead to fundamental changes,” as those employees will allocate more money and online community time at home, and will be at least slightly more likely to relocate.  There will, though, be backlashes and countertrends which we cannot forecast with any accuracy.  In all, Yogi Berra was right when he said, “it’s tough to make predictions, especially about the future.”