I was the predictor this time, and fell flat on my face.  Because of new unemployment compensation applications camping out at over one million per week, I thought we would see the seasonally adjusted rate worsen from June’s 11.1% to 13% or 14%.  Not only did it not reach that level, it improved.

Other numbers released in this morning’s Bureau of Labor Statistics Employment Situation Summary got better as well.  Unadjusted unemployment fell 0.7% to 10.5%.  Total nonfarm payroll jobs were up 1.8 million, meaning that along with those six-plus million position losses that sent people virtually or in person to their employment offices, there were about 8 million jobs created or reinstated.  The count of the unemployed lost 1.5 million and is now 16.3 million, with people considering themselves to be on temporary layoff adding up to 1,400,000 less to reach 9.2 million.  Those out for 27 weeks or longer, meaning they lost their jobs long before the pandemic, now number 100,000 more and total 1.5 million.  The employment-population ratio, the best indicator of how common it is for Americans to be working, gained 0.5% to 55.1%, and those working part-time for economic reasons, or keeping less than full-time opportunities while seeking them, dropped from 9.1 million to 8.4 million.  The two statistics on which I have been reporting that did not get better were the labor force participation rate, down 0.1% to 61.4%, and average private nonfarm payroll hourly earnings, up 2 cents to $29.39, not an improvement since increases in this number, way-high since coronavirus started, indicate more lower-level workers unemployed.

The American Job Shortage Number or AJSN, the metric showing how many additional positions could be quickly filled if all knew they would be easy to get, fell over 1.3 million as follows: 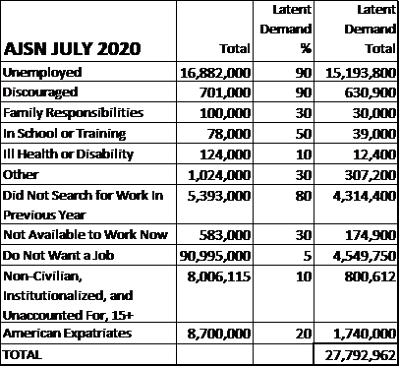 The AJSN is now 6.5 million less than when the first month of the pandemic reached the data in mid-April, but is 11,400,000 higher than a year before.  Only 54.7% of it comes from those officially unemployed, meaning that latent demand for work includes 12.6 million positions from those with other statuses, roughly a three-way split between those wanting work but not looking for it for a year or more, those claiming no interest in employment, and all others.

What is really happening now?  Given the historically elevated counts of those filing for jobless benefits, there is great employment churn.  Apparently it is, or those working are, coming and going at an unusually rapid pace, on the order of five times as much as before Covid-19.  There are almost certainly too many people being allowed to work in the Deep South and Florida, the states now worst at containing the virus.  Beyond that the picture is muddled, especially as lower joblessness is less desirable now than lower infection rates.  Until we see both together, we cannot take credit for any employment improvement.  The turtle went forward again, but is too concerned with getting sick to be happy with that.

Posted by James B. Huntington at 6:57 AM