The Unmitigated American Disaster Continues with Another Execrable Week, and a Call for Cutting Vaccine Expectations – When Will We Get Relief?

Another seven days of frightful news.  Here are its headlines and subheads:

“Eighteen states set daily case records in the past week, and 40 have had 14-day increases in cases per capita” – The New York Times, July 26th

“The U.S. economy’s contraction in the second quarter was the worst on record” – Same

“Baseball’s Dumb Decision” – of a July 29th-published letter written to the Times by Kenneth L. Zimmerman, in which he pointed out that “17 as of this writing” players and coaches on one team alone – the Miami Marlins – had recently tested positive, and said “allowing the Major League Baseball season to be played in the middle of a deadly pandemic is the worst decision the league has made since allowing Roseanne Barr to sing the national anthem 30 years ago.”

“Coronavirus in the U.S: Latest Map and Case Count” – same source, July 30th.  This article’s headline wasn’t scary, but it showed 68,000-plus new cases and 1,400-plus deaths the previous day alone.  The Deep South, including and especially Florida, is doing the worst now.  “New cases are decreasing” in Arizona, South Carolina, Texas, Kansas, Vermont, and the U.S. Virgin Islands, but are “mostly the same” or rising everywhere else.

And, though a bit older, this chart, where all you need to see is the shape of the curves: 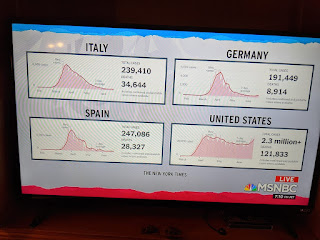 And now, to adjust our expectations, along comes “A Vaccine Reality Check.”  This piece by Sarah Zhang, listed as from July in The Atlantic, told us why, even if one of those arrives as early as it reasonably can, “it certainly will not immediately return life to normal.”  Our central government, lately ineffective even when competent, “will have to allocate doses, perhaps through a patchwork of state and local health departments with no existing infrastructure for vaccinating adults at scale” to those are sure they want it, now only about half of adult Americans.  Zhang projected five months, or December, for “a safe and effective vaccine,” which I presume includes distribution.  In the meantime, “without the measures which have beat back the virus in much of Europe and Asia, there will continue to be more outbreaks, more school closings, more loneliness, more deaths ahead.”  The good news is that “at least six” different versions are in “or about to enter” the third and final phase of human testing, which “will take several more months,” and “the high and rising rates of COVID-19 in the United States do make it easier to test vaccine candidate here.”

Then, we will get a series of ugly disagreements.  We can sensibly agree that healthcare workers should get the first vaccinations, but who after that?  People in states with highest infection rates, rewarding them for their less prudent behavior?  Those in the Northeast as appreciation for their good conduct, who need it immediately the least?  Blacks, because their lives Matter, even if that would be obvious bigotry?  Those whose local governments are most prepared to distribute it, punishing those not as lucky?  I could easily see the first virus distribution ready for, say, December 1st, but a month or two of legal motions making us all wait and all lose.  Accordingly, while we appear to be on the path to recovery, and a vaccine still seems our only chance to start that within the next year, we still have many steps to walk before then.

What will happen?  I forecast a vaccine ready by year’s end, with dissemination, while muddled, piecemeal, divisive, resource-constrained, and court-hobbled, to be 95% completed by the end of March.  That is eight months from now, so we must maintain patience.  Then we can work out what life will be like in America after that.  Much more on that huge issue will follow in this space in the weeks and months to come.