American Impatience, and Its Antidotes

What is the United States doing now?

Getting over 1 million, about 5 times the usual amount of, new unemployment applications every week – the 16th straight being 1.3 million ending Saturday.

Once again, running short of protective supplies and hospital beds.

Precipitating columns from moderate commentators such as David Brooks, who two weeks ago wrote “that we are losing the fight against Covid-19,” as “our behavior doesn’t have anything to do with the reality around us,” and “we just got tired so we’re giving up.”

Staying divided into two main camps, each with its own sacred cows, which both push their own priorities over public health.

Arguing about whether to open public schools this fall, which, if either part of the vague and poorly substantiated notion that children neither get infected nor spread it turns out to be wrong, could create over 100,000 first-rate virus incubators spread throughout the land.

Distorting the simple acts of wearing masks and staying six feet away from others into affronts on freedom and even indications of a huge, impossibly well-hidden conspiracy from people who cannot even deliver mail consistently.

Getting the worst of both worlds of cutting coronavirus infections and healing its economy, succeeding only in doing neither.

Disgracing itself – if not going down the drain altogether.

What can we do about all of this?

Wear that mask – for others, not yourself – and keep your distance.

Read and keep the following chart, and make your own judgments about what is worth risking and what is not: 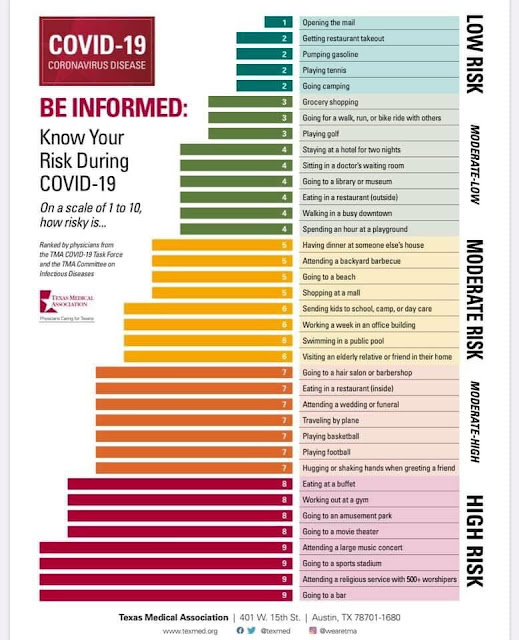 Read something about civilized, blameless people having much more hardship than needing to stay home more and putting large gatherings on hold.  Anne Frank’s Diary of a Young Girl is a good place to start, along with other accounts of World War II with its rationing that went on long afterwards, loved ones away and in mortal danger, indefinitely conscripted soldiers, and other things much worse than what we have now.  Also read Ecclesiastes 3:1-8, “A Time for Everything,” even if you are not Christian.

Take care of yourself physically and mentally.  Use extra time and any obligation reduction to help your own situation, and prepare for your future, in any way you can.  Find things to enjoy as well.

Remember that coronavirus vaccine research is, as far as we can tell, going superbly.  We may need that to bail us out in this country, and we may get it – just not today or tomorrow.

Take heart that there are American places that have done as well as elsewhere.  My county, Sullivan in New York (75,000 population), has gone from over 500 active Covid-19 cases to nine, with nobody hospitalized.  It is no coincidence that I almost never see people here maskless or encroaching on others.

Vote on November 3rd, for the presidential candidate you think can best get us back on track.  Vote even, and especially, if you sat out in 2016.