The beat goes on…

The United States has a new peer group of countries, which is Colombia, Bolivia, Brazil, South Africa, Kyrgyzstan, and Oman.  They were the only others with a rate of over 14 new Covid-19 infections last week per 100,000 population.  Here is the map as it appeared in the Thursday New York Times: 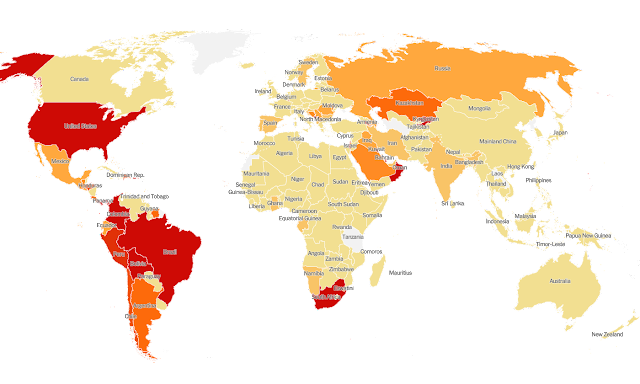 The Bahamas, in the face of a 50% case increase blamed on American tourists not wearing masks or practicing social distancing, rolled back their willingness to allow them.

The major league baseball mini-season started yesterday, and I give them an even chance of completing all 60 pre-playoff games.

We achieved our 18th straight week of over 1 million unemployment claims, with 1.4 million.
Moving on from there to our national financial and trade situation, we have Ben Casselman and Jim Tankersley’s “How to Save a Half-Open Economy” in the July 17th New York Times.  We’ve heard plenty from those two over the years, and what they published here was a cut clearer and more thoughtful than most other pieces on this subject.  They recommended five general things.

The first, “prioritize public health,” included “the economy cannot recover until the virus is in check,” obvious to half the population, and matched my recent observation that if we try to bring back businesses prematurely, we will get neither economic nor pandemic success.  The authors meant making public health the top priority.  Taking short-term pain here has always been better than prolonging it, and for examples we need look only at the seven northeasternmost states.

Second, “extend unemployment benefits.”  As Casselman and Tankersley pointed out, such payments “are serving three purposes” by keeping people away from workplaces to serve their first recommendation, allowing them to stay afloat, and helping the economy by providing money likely to be spent and circulate.  We may not need to maintain $600 per week, with $400 possibly nearly as effective, but with OSHA nowhere in sight it is blithe to suggest that people be encouraged to go back to jobs with doubtful or worse safety.

Third, “spend what it takes to reopen schools safely.”  Well, four out of five ain’t bad.  I still think that, advantages acknowledged, we have no business opening in-person elementary and middle schools this fall, if only because children cannot be expected to be disciplined about following social distancing, Plexiglas shields notwithstanding.  (I assure you that my third-grade self would not have behaved himself any more with that than he did with less life-preserving rules, which wasn’t much.)  We would do better to defer to the authors’ first rule above.

Fourth, “keep businesses alive.”  Casselman and Tankersley put into print something that hasn’t been there enough, that it is the small enterprises, not large corporate ones with more money and more borrowing power, which need our help now.  The owners may be sustained with other programs, but their ventures may otherwise be erased, as their rents or mortgages and additional expenses simply cannot be made without a full number of customers.  As well, as economist David Wilcox put it, paraphrased by the authors, “the government has effectively forced business owners to take a hit… so it should help them survive.”

Fifth, “provide some certainty.”  That would call for congressional planning and interparty cooperation, in letting people and small firms know what they can expect for a year or more, without looming questions such as this week’s about whether federal jobless payments will continue.

That brings us to the good side of this week’s events.  Although we are lacking any formal announcement, except for China saying they expected one to be available by year’s end, news media scuttlebutt has it that we are getting close to having a vaccine developed.  Trials in three different Western labs have apparently gone very well, and articles have mentioned the need for sufficient funding and glass containers.  Based on the admittedly vague things I have seen, I call us a favorite to have widespread vaccine implementation by the end of the first quarter.  In the scheme of things, that will arrive before we know it.  Then we will be rescued.  If that fails to materialize, we can take heart about another probable pandemic-easing outcome – per sportsbook.ag, Donald Trump is now a 29 to 20 reelection underdog.

Yes, likely something good will happen.  In the meantime, you know the drill – wear a mask and stay six feet away from others.