On the Road to Recovery: Employment Data Improves, Including AJSN, Showing Latent Demand for Jobs, 5 Million Lower Than 2 Months Ago

After last time, I didn’t even try to guess what this morning’s Employment Situation Summary would say, and not many others seemed to either.  The only projection I saw was for a gain of 2.4 million jobs.

That turned out to be only half of what we got.  Total nonfarm employment increased 4.8 million from May, with seasonally adjusted joblessness down from 13.3% to 11.1%.  The latest data showed 17.8 million unemployed, down 3.2 million, with those out for 27 weeks or longer up 200,000 to 1.4 million.  The two measures of how common it is for people to have jobs or be officially unemployed, the labor force participation rate and the employment-population ratio, both improved, with the former going from 60.8% to 61.5% and the latter up from 52.8% to 54.6%.  Those working part-time for economic reasons, or wanting a full-time position while holding on to something shorter, counted 9.1 million, bettered from 10.7 million.  Average hourly private nonfarm payroll earnings fell 38 cents, reflecting people with lower pay returning to work, and is now at $29.37.

A measure I have not previously mentioned, those on temporary layoff, has gone from 18.1 million in April and 15.4 million in May to 10.6 million last month.  That is because fewer people considered themselves off only short-term, along with others returning to work.

The American Job Shortage Number or AJSN, the measure showing how many more positions could be quickly filled if all knew they would be easy to get, dropped 2.9 million this month, as follows: 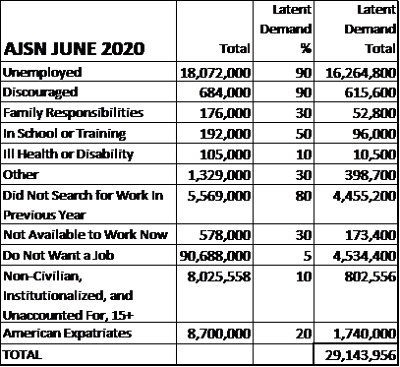 The AJSN has greatly improved since April’s 34.3 million, but is still almost 13 million higher than a year ago.  Almost all of the difference since May is from lower official unemployment and a smaller count of those wanting work but not looking for it for a year or more, although those claiming no interest in work counted almost 2 million fewer.  That means jobs are getting more available in at least some areas.

Although there is still a lot of confusion about temporary versus permanent layoffs, and the BLS household survey response rate dropped again to 65%, the American employment situation is clearly improving.  That is hardly confusable with “good,” but we are on the way back – at least we were, before our new coronavirus case tally went up late last month.  The turtle, though far behind his pre-April position, took a healthy step in the right direction.

Posted by James B. Huntington at 6:30 AM