Two things happened with this morning’s Bureau of Labor Statistics Employment Situation Summary which haven’t for a bit.

The report showed us other real progress.  The count of those in temporary layoff plunged from 9.2 million to 6.2 million.  Those working part-time for economic reasons, or holding on to less than full-time jobs while looking thus far unsuccessfully for conventionally longer-hours ones, counted 7.6 million, down 800,000.  The two measures of how common it is for people to be either working or officially unemployed, the labor force participation rate and the employment-population ratio, gained 0.3% and 1.4% respectively and are now at 61.7% and 56.5%.  The downside was an increase in those out for 27 weeks or longer, up 100,000 to 1.6 million, and another gain, this one 8 cents, in hourly earnings for average private nonfarm payroll workers, which at $29.47 is elevated enough to mean that former low-pay employees are not returning in significant numbers.

The American Job Shortage Number or AJSN, the measure showing succinctly how many more positions could be quickly filled if all knew that getting one would be as easy as getting a pizza, improved 3.5 million over the previous month as follows: 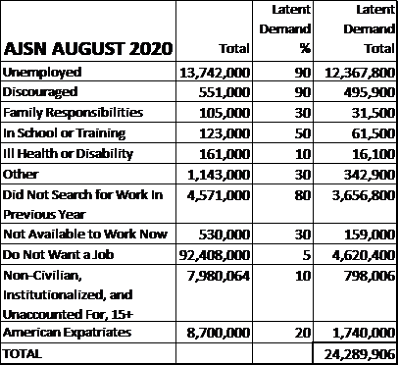 We continued the trend of those marginally attached to the labor force getting fewer.  Of the July to August drop, 677,000 was not due to lower official unemployment – that included 657,000 from  a reduced count of people wanting work but not looking for it for a year or more and 135,000 from fewer people calling themselves discouraged.  However, 1.4 million more Americans claimed no interest in employment, offsetting the above by 70,000.  The share of the AJSN from those officially jobless fell from 54.7% to 50.9%.

Although we are recovering, both from the coronavirus and from the economic shock it caused, we are still far worse than before the pandemic began.  The unemployment count and percentages are more than double what they were in August 2019, and the AJSN is 8.1 million higher.  If we can stay on track, both with employment-related indicators and with Covid-19 case counts, that will be good.  If one or the other relapses, we will be in even more trouble.  Although the turtle cannot see where he was as recently as March 2020, he, indeed, took a big step forward this month.

Posted by James B. Huntington at 6:43 AM