The Logistics of the Upcoming Vaccine, and Other Early September Coronavirus Issues and News

It’s been three weeks since I wrote a post dedicated to Covid-19.  The United States has reached a relatively stable point, with the number of cases slowly declining, to a September 9th 7-day rolling average of 36,733.  The hot spots keep changing – here is yesterday’s New York Times map, with red showing counties with 56 or more coronavirus incidences per 100,000 population over the previous 7 days: 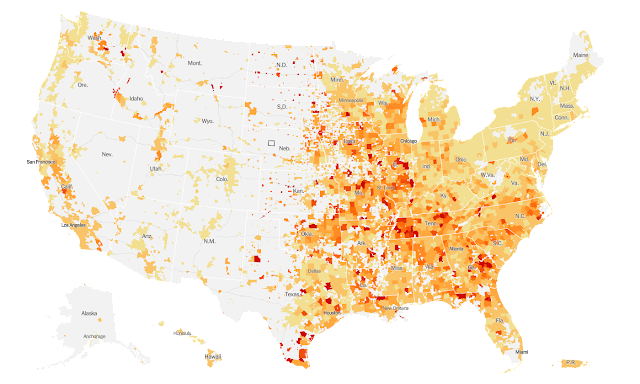 First and oldest up is “US stockpiling 3 different types of coronavirus vaccines through ‘Operation Warp Speed’” (Megan Hanney, FOXBusiness, September 2).  The title said it – our government is quickly amassing inventories of vaccines being tested, which cannot be used now but, if the FDA approves any, will provide a running start.  A fine tactic, even if any or all turn out to be worthless.

Preparation was also the topic of more recent pieces, such as “What We Know About the C.D.C.’s Covid-19 Vaccine Plans,” by Carl Zimmer and Katie Thomas in the September 3rd New York Times.  This three-page primer answered questions we should all have, such as “how do these vaccines work” (by exposing human bodies to weakened or inactivated virus shells or pieces of same so they can learn to resist others), and “who will get it first” (not fully resolved, but probably health-care workers, “essential workers,” and those in the likes of nursing homes), along with a description of Phase 1, 2, and 3 testing.  Some here has been updated below, but it remains a worthy one-source reference.

Next was “’Mind-bogglingly complex’:  Here’s what we know about how Covid-19 vaccine will be distributed when it’s approved” (Elizabeth Weise, USA Today, September 6th).  A Johns Hopkins operations manager, someone who should know, was responsible for the title quotation, but Weise clearly and understandably compressed its subject into four-plus printed pages.  Here we learned that “no one will be charged for the actual dose” (though insurance-plan treatment is not yet established), that “people at high risk for severe disease” may also get high priority, that the Pfizer and Moderna products now “are seen as the front-runners” among American-made efforts, that sites for vaccinations will be approved by the CDC and will order their product from their state governments, how the doses will be handled considering that the two leading contenders must be stored at -4 and -94 degrees Fahrenheit respectively, and even something about the producers’ “specially designed transportation containers.”  Once more we are reassured, by knowing that great effort has put into vaccine logistics and coordination.

Then two days ago came out “SD governor criticizes study suggesting Sturgis bike rally led to 260,000 COVID-19 cases,” by Megan Raposa in USA Today.  The Center for Health Economics and Policy Studies, located at San Diego State University, did that research, concluding that the 462,000 people attending that August event, at which masks and social distancing were far from universal, could have propagated over half a new case per person, resulting in, per another study, a $12.2 billion, or $26,500 per attendee, public health cost.  These estimates were getting heavy criticism yesterday and may change.  As of the latest New York Times data that same day, though, North Dakota had the highest number of new daily per-capita Covid-19 cases of the 50 states, followed by South Dakota.  It is certain that such a huge and arguably imprudent gathering would be bad for the pandemic, regardless of exact or even approximate numbers.

Also September 9th and in the same publication, by its Editorial Board, came “Rushing coronavirus ‘Holy Grail’ vaccine could turn into a curse.”  It warned of “politics bullying science” being able to “cripple health institutions’ credibility for years” if “Donald Trump’s great bid for redemption after so many coronavirus failures… also fails because of mismanagement.”  Such a reelection-related tactic has at least a real chance of being attempted, and, as this piece warns, cannot be allowed to influence the FDA.  This will remain a polarized controversy, whether we want it to be or not, through at least November 3rd.

Last was one from yesterday, “Pay People to Get Vaccinated” by economics textbook author N. Gregory Mankiw in The New York Times.  From a strictly economic view, Mankiw wrote that, given the disheartening 36% of Republicans and the downright depressing 58% of Democrats saying in an NBC News/Survey Monkey Weekly Tracking Poll that they would “get the vaccine,” and that 70% to 90% of Americans would need it for the country to “develop herd immunity,” it would be worthwhile for our government to offer a monetary incentive, the amount of $1,000 per person suggested by a Brookings Institution economist.  That could be $300 billion, but would be a bargain if it completely ended the pandemic.  More food for thought, and something, as with the above topics, we will hear much more about – I will report it here.