Kudos once again to the economists who, collectively, estimated we would gain 580,000 net new nonfarm positions last month.  Per the Bureau of Labor Statistics Employment Situation Summary, it was 638,000, only 10% away.

At first look, most of the remaining report was also favorable.  The marquee adjusted unemployment result was down a full percent to 6.9%, with unadjusted following at 6.6%, off 1.1%.  The total jobless count fell 1.5 million to 11,100,000, with those on temporary layoff improving 1.4 million to 3.2 million, and the two indicators of how common it is for Americans to be working or close to it, the employment-population ratio and the labor force participation rate, up 0.8% and 0.3% respectively to 57.4% and 61.7%.

The American Job Shortage Number or AJSN, the indicator showing how many new positions could be quickly filled if all knew they were easy to get, improved over 1.9 million to reach the following: 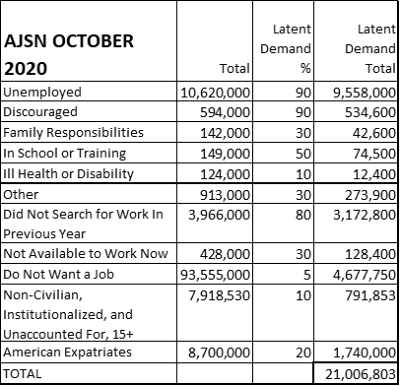 All but about 40,000 of the recovery came from those unemployed and those not having looked for work in the past 12 months.  The count of those claiming no interest in a job dropped 131,000, people calling themselves discouraged added up to 38,000 more, and the “Other” category, inflated since pandemic’s beginning, tacked on 22,000.  The share of the AJSN coming from those officially jobless fell again and is now at 45.5%.  Yet the AJSN is still 6 million higher than a year ago.

So what is the bad news?  Three significant metrics got worse.  Those unemployed 27 weeks or longer was up 1.2 million, 50%, to 3.6 million.  The count of those working part-time for economic reasons or looking but not finding a full-time opportunity while keeping something shorter, which improved greatly last month, lost a chunk of that with its 400,000 worsening to 6.7 million.  Average private nonfarm payroll wages gained 4 cents per hour and are now $29.50, poor since it is up 4.6% over the past year or well over the inflation rate, so reflects people at the bottom of the pay scale not returning.  These three statistics together imply that we are now building a lower class getting the worst of the mostly pandemic-related employment drop and further suffering from unemployment benefits running out along with the lack of any other payment program.

The other negative outcome was increasing Covid-19 infections.  From September 16th to October 16th, their 7-day daily average soared from 39,064 to 56,340.  Deaths were down 18%, though, from 853 to 697.  In conjunction with the generally good jobs numbers, the infection rate, a better yardstick of pandemic-defense practices as mortality reflects treatment improvements, suggests we are letting the economy run at excessive expense of Americans’ health and lives.

Jobs and money can change, but deaths, back up to 836 per averaged day as of November 5th, are permanent.  I hope this trend ends soon, and so does the turtle, whose forward movement this time was stopped by illness.

Posted by James B. Huntington at 7:05 AM