The Pandemic: How Dark Now and How Bright Next Year?

The American Covid-19 situation was more than ready to take over the headlines from the same country’s presidential election.  Lost in the stories of slow week-ago vote counting was an alarming infection uptick, which has got even worse since then, shown in yesterday’s New York Times map, with counties having at least 56 new daily cases per 100,000 population in bright red: 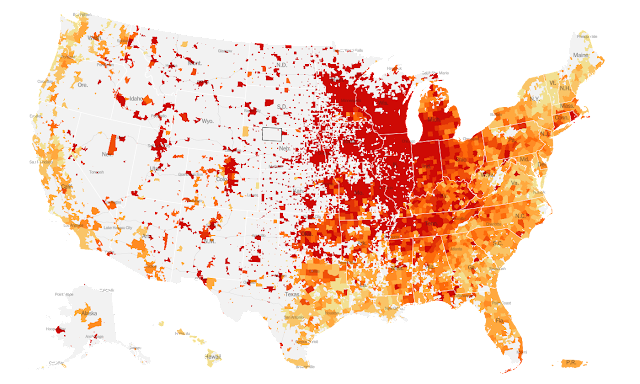 The same publication’s cases-against-time chart showed Wednesday’s 7-day average of new daily incidences at 128,096, an all-time high, and a sharply rising recent trend – that number a month before was 52,864, reflecting a 142% rise.  Covid-19 deaths during that time have increased from 714 to 1,067, or 49%.  Per the November 11th New York Times, “U.S. Hospitalizations Top 61,000, a Record,” which are reaching maximum occupancy in some areas.

How will this pandemic be resolved?  In John M. Barry’s October 19th “What Fans of ‘Herd Immunity’ Don’t Tell You,” also in the Times, we learned that this potential solution, defined here as “the point at which enough people have become immune to the virus that its spread becomes unlikely,” now isn’t one at all.  One problem is harm done to infectees, including that “a significant number, including those with no symptoms, suffer damage to their heart and lungs,” and that “one recent study of 100 recovered adults found that 78 of them showed signs of heart damage.”  Since herd immunity entirely through previous illness would require from 43 percent to 70 percent of people to have been sick with it, up from mid-October’s 10%, that would call for at least one million American deaths.  Overall, herd immunity as a policy objective, with no widely available vaccine, is irresponsible, brutal, and even murderous.

The near future, though, is another matter.  Monday’s largest news story was “Pfizer’s Early Data Shows Vaccine Is More Than 90% Effective,” by Katie Thomas, David Gelles, and Carl Zimmer in that day’s New York Times and with vast coverage elsewhere.  The official drug maker announcement, paraphrased by the authors, held “that an early analysis of its coronavirus vaccine trial suggested the vaccine was robustly effective in preventing Covid-19,” and that “an analysis found that the vaccine was more than 90 percent effective in preventing the disease among trial volunteers who had no evidence of prior coronavirus infection,” which if confirmed “would put (this product) on par with highly effective childhood vaccines for diseases such as measles.”  Pfizer expected to ask the FDA for emergency-use authorization later this month.  This report was taken seriously enough to be credited with much or more of the Dow Jones Industrial Average’s 1.2 percent or 834-point gain that day.  The article, along with ample background material, also mentioned that ten other vaccines, three American, are also in “late-stage trials.”

Within hours the follow-on pieces came out.  That same day, Carl Zimmer and Katie Thomas published “Pfizer’s Covid Vaccine:  11 Things You Need to Know,” also in the Times, which addressed basic questions of knowledge and safety, along with the not-yet-answerable “Who will get the new vaccine first?” and “When will the general public be able to get it?,” along with “Can we stop wearing masks now?,” to which the authors started their response with “please don’t.”  Quickly the coverage became more incisive, with Arthur Allen’s November 10th Times “Five Questions to Ask About Pfizer’s Covid-19 Vaccine,” including answers informing us that it needed to be stored at about minus 100 degrees Fahrenheit and required two doses, and a conclusion that “still, this is good news.”  Aaron E. Carroll and Nicholas Bagley tried to head off premature slacking off with the same day and publication’s “Don’t Get Too Excited About the Coronavirus Vaccine,” the title seemingly not intended to curb optimism;  per the authors, “a death avoided this winter is a life saved,” “the goal is now no longer to learn to live indefinitely with the virus,” (with the Pfizer announcement, which they described as “unmitigated good news,”) “the case for skipping Thanksgiving becomes much stronger,” and “mask mandates, gathering restrictions and business closures are (now) more tolerable.”  In the last piece, issued November 10th by The Atlantic in newsletters, “Now is a very weird time for a vaccine rollout,” editor Caroline Mimbs Nyce posed questions to well-versed staff writer Sarah Zhang about the effect of our unusually rough transition between presidential administrations.  Zhang concluded that Donald Trump was, right now “just a really loud voice” who could not impede vaccine distribution, even if he continues to refuse to concede the election.

What does all this mean for us?  We need to follow Carroll and Bagley’s advice and, if anything, be more diligent about mask wearing and social distancing.  As for typical indoor multifamily holiday gatherings, we should skip them, as my wife and I elected to do.  We’re best off hoping for smooth sailing and justified FDA approval for Pfizer, but should realize that even if those things do not materialize, there are others close behind.  We need to plan to get the vaccine as soon as we can and be patient about being notified.  We can loosely anticipate traveling and visiting relatives during the fourth quarter of 2021, or, with luck, in the third.  And, more than anything else, let’s keep the faith, hang in there, and know that those waiting for normal life in the early 1940s had to hold off much longer.  We should be optimistic.  As went a World War I-era song, “Horsey, keep your tail up.”