A Week Before Christmas: Where We Are Going on Jobs, the Economy, and COVID-19

To start with the worst news, here is yesterday’s New York Times world map of coronavirus infection rates, with purple the highest: 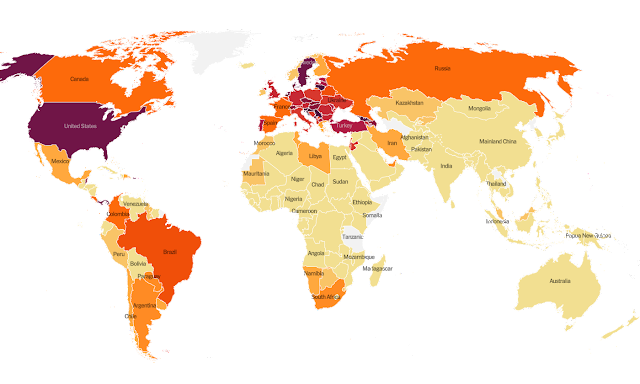 Our country comes in at 64 new daily cases per 100,000 population, exceeded, around the globe, only by eight in Europe, the most populous Serbia.  The 7-day average of new world infections, again on each individual day, was 631,803, another all-time high, as was the 11,319 deaths.

Back home, we had 935,000 new state unemployment claims filed last week, rising along with infection rates and over four times its consistent pre-pandemic result.  In the December 14th New York Times “What Happens to the Unemployed When the Checks Run Out,” Eduardo Porter cited a Century Foundation study showing that 12 million workers are now poised to lose their jobless benefits the day after Christmas.  However, a rescue is underway, documented in yesterday’s “Closing In on Stimulus Deal, Lawmakers Clash Over Fed’s Role,” by Emily Cochrane and Jeanna Smialek, also in the Times.  Headed by Senate Majority Leader Mitch McConnell, now choosing to further marginalize the president now doing little other than babbling like a madman about having won reelection, “the emerging package was expected to include direct payments of $600 for American families and children… as well as an extension of more generous unemployment programs… (and) a revival of enhanced federal unemployment benefits,” this time $300 weekly, “along with billions of dollars for small businesses, vaccine distribution and schools.”  Per the title the senators and representatives still have a few bugs to iron out, but since McConnell said “we need to complete this work and complete it right away” and “the Senate is not going anywhere until we have Covid relief out the door,” it’s going to happen.  Kudos to McConnell and the others – legislative focus and horse trading have come back.

On the vaccine front, progress is brisk.  With approval of Pfizer’s product last week, 2.9 million doses – which according to some reports may actually be well over 3 million – were shipped a week ago and are now being administered.  And yesterday, per Denise Grady et al. in the New York Times, “F.D.A. Panel Endorses Moderna’s Covid-19 Vaccine,” and formal authorization, expected today, “would clear the way for some 5.9 million doses to be shipped around the country starting this weekend.”  The Moderna product “can be stored at normal freezer temperatures” and so “can go to more places.”  There are other vaccines in the pipeline as well.  While I think choosing to participate is clear-cut, according to Simon Romero and Miriam Jordan’s “The Vaccines Are Coming.  A Divided and Distrustful America Awaits,” in the December 11th Times, other objections include possible side effects, the expected conspiracy theories, and even “a crushing guilt in getting a vaccine that my child would not have access to at the same time.”  Well, some concerns are better than others.

We end with good news, for investors anyway.  Still in the Times, Wednesday’s “Wall Street Sees Cold, Hard Cash in Vaccine Storage” by Andrew Ross Sorkin et al. reported that “private equity firms are pouring money into small companies that can store and help transport fragile coronavirus vaccines at required Antarctic temperatures.”  One well-positioned firm is CryoPort, “whose products can store matter at minus 180 degrees Celsius,” vastly colder than even the Pfizer vaccine needs.  When you consider that such a company can also provide household icebox-type capability, you have a fine opportunity – or would have a week or two ago.

Expect next week’s post on Thursday, Christmas Eve.  Stay close – but not too close.