This morning’s Employment Situation Summary had exactly five favorable things.  The seasonally adjusted and unadjusted unemployment rates each improved 0.2% and are now at 6.7% and 6.4%.  Accordingly, the number of jobless came down 400,000 to 10.7 million.  We added 245,000 net new nonfarm payroll positions, which though well below a 450,000 forecast is still positive.  The number of people on temporary layoff fell a similar amount to 2.8 million.

The rest of the report, though, was as bleak as some expect this winter to be.  Those officially jobless for 27 weeks or longer now count 300,000 more, or 3.9 million.  The two statistics showing best how many Americans are working or involuntarily removed from that, the labor force participation rate and the employment-population ratio, dropped 0.2% and 0.1% respectively and are now at 61.5% and 57.3%.  Those working part-time for economic reasons, or looking thus far unsuccessfully for full-time positions while keeping shorter-hours ones, held at 6.7 million.  Average hourly private nonfarm payroll wages, a reverse indicator since its large early-pandemic increase was from lower-paid workers disproportionately losing their jobs, gained another 8 cents per hour to $29.58.

The American Job Shortage Number or AJSN, the figure showing how many more positions could be filled if all knew they were easy to get, improved 47,000 on official unemployment’s drop barely offsetting rises in almost every category of marginal attachment, in the second through eighth rows below, as follows: 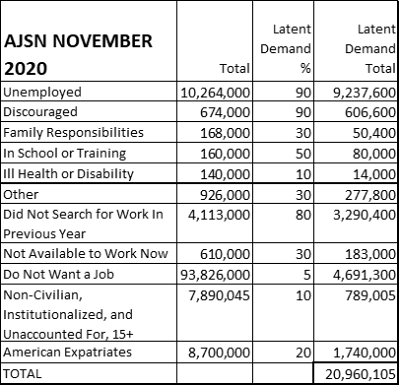 Those claiming no interest in work increased again, as it usually does when jobs are scarce.  The share of the AJSN from legally defined unemployment fell to 44.1%, down 1.4%.  Compared with a year ago, the AJSN has gained almost six million.

If this side of the jobs-and-pandemic coin was tarnished, the other was smashed up.  Per today’s New York Times, from October 16th to November 16th the 7-day national average of new daily Covid-19 infections jumped 176% to 155,532.  The same for daily deaths went to 1,155, up 66%, and that for the number of hospitalized patients soared 96% to 73,268.  All three have increased further since.

To what does all this add up?  We are sort of holding the line on employment, though the number of people working fell 230,000.  More people are taking refuge in statuses of marginal attachment.  The strange thing is why this set of employment numbers, given the out-of-control coronavirus situation, is as strong as it is.

Clearly our governments are making the wrong choices.  If fewer people were working in harm’s way, losses which could be mitigated by further support and stimulus packages, the pandemic numbers would drop.  Two hundred seventy-six thousand Americans have died from the virus, many while pursuing paychecks, and we’re nowhere near done.  With 2021 vaccine availability almost certain for all living Americans, that is needless.  As for the turtle, he didn’t move and can barely breathe.

Posted by James B. Huntington at 7:11 AM