For Free Thinkers Only: America’s Sexual Shortcoming – I

Almost three months ago, New York Times columnist Ross Douthat came out with “The Redistribution of Sex,” in which he, oddly one of the few social conservatives writing for a generally liberal source, considered some recently published offbeat ideas, catalyzed, also strangely, by the Toronto terrorist group calling themselves “incels” or “involuntary celibates.”  Douthat suggested that radical thoughts, as put forward by “brilliant weirdo” and George Mason economics professor Robin Hanson and Oxford philosophy professor Amia Srinivasan, could point us to improvements on what has been a largely undiscussed failing of the 1960s sexual revolution – that its bounty has been distributed excessively unequally.

Douthat’s column, available at https://www.nytimes.com/2018/05/02/opinion/incels-sex-robots-redistribution.html, had a lot to say.  Starting with “one lesson to be drawn from recent Western history might be this:  Sometimes the extremists and radicals and weirdos see the world more clearly than the respectable and moderate and sane” (italics his), he applied that metathought to this issue, showing that it was wrong to think that “the desire for some sort of sexual redistribution is inherently ridiculous.”  As happens with unusual opinions – for example, some years ago I looked at the Nazi and Communist Party websites and found that both groups were against the Iraq war – this one was shared by rather different thinkers, in this case libertarian Hanson and apparent radical feminist Srinivasan.  As he put it, “intellectual eccentrics – like socialists and populists in politics – can surface issues and problems that lurk beneath the surface of more mainstream debates.”  That is exactly what we have here.

Douthat’s commentary, which did not advocate such redistribution itself but only discussing and considering it, stemmed from his Roman Catholic views and his conviction that such a thing would someday come to pass, as provided by “sex workers and sex robots.”  He called “the idea… entirely responsive to the logic of late-modern sexual life,” and pointed out that “the sexual revolution created new winners and losers” by “privileging the beautiful and rich and socially adept in new ways and relegating others to new forms of loneliness and frustration.”  He tied in, though briefly, related issues such as “the sexes… struggling generally to relate with one another… and not only marriage and family but also sexual activity itself in recent decline.”  He in effect proposed, as an alternative to “the culture’s dominant message about sex” which he described as “still essentially Hefnerian,” the possibility of “reviving or adapting older ideas about the virtues of monogamy and chastity and permanence and the special respect owed to the celibate.”  He foresaw the problem eventually addressed by, as well as workers and robots, “some combination of changed laws, new technologies and evolved mores to fulfill it.”

As expected, Internet reaction was extensive, sharp, and severe, generally showing more than disagreement but hostility.  Often, it is hard for conservatives and liberals to even contemplate something that does not fit their worldview, especially something as controversial as deep societal changes.  The responses revealed a long-standing situation preventing serious discussions in many areas, the failure of otherwise intelligent people to understand that others’ backgrounds, views, and life experiences are completely different.  (I have long considered well-educated East Coast female liberals, with their snobbishness or outright naivete about the likes of Oklahoma waitresses, the worst offenders, but conservatives, who often do not realize that patriotism can take many forms, are hardly exempt.)

And yes, the problem is real.  Neither millions of drugstores stocked with birth-control pills nor the massively increased amount of sex help those unhappily without sexual relationships, those ranging from what Douthat described as Srinivasan’s “overweight and disabled, minority groups treated as unattractive by the majority” and “trans women unable to find partners” to the oceans of men under 25 and women over 50 who, from some combination of appearance, rejection tolerance, fear, logistical barriers, and inability to implement, are romantically alone.  If, as common knowledge holds, males’ sex drives peak when they are younger and females when they are older, too many of us are doing the equivalent of spending our peak baseball playing years in the minors.

How can we sort out this issue and put it in its proper place?  Expect that in two weeks.

Posted by James B. Huntington at 12:32 AM No comments:

Many factors in the self-driving industry have happened as I anticipated.  Consortia have formed, solidified, and dissolved.  Lawsuits have popped up.  A great bull market for technicians and managers with top knowledge has materialized.  And technical progress, along with investment and business effort, has marched forward.  So, when looking at updating our employment and technology-saturation projections, what less-expected events from the past year need to be incorporated?

First, the crashes, especially the fatal one, received more negative reaction than I would have thought.  They were not that disturbing, given the extreme situation with the pedestrian in the dark and most others owing little or nothing to the vehicle’s driverlessness.  Yet it was worthwhile for companies to see how people would react, as they were certain to occur sometime.

Second, Uber, with its business recklessness, has muddied the autonomous waters.  The Arizona crash was just one example of why it does not seem to have enough due diligence for this field, and it is too easy for people to conflate its mistakes with the work of far more reliable firms.

Third, it is possible, though it is hard for me to assess from outside the field, that technical progress has been a shade slower than estimated.

Fourth, already have emerged some super-strong players, particularly Waymo and Aptiv.  They could still end up Stanley Steamers to someone else’s Toyotas, but the chances are edging down.

Fifth, remote human control, which two years ago I made a stage of my own set of automation levels, is now getting press mention.  In the National Highway Traffic Safety Administration’s Society of Automotive Engineers scheme, which I continue to use as below, it would fit in well as an option for level 4, or high but not full automation, or near the end of level 3, which still requires a driver to be available.

Sixth, publicity, toward understandings of how many kinds of autonomous vehicles and their interiors there will be and on how wide a range of life-changing possibilities they will end up having, has started.  Fall’s New York Times magazine section was especially effective.

Seventh, it now looks likely that there will be real regional differences in driverless-vehicle acceptance within the United States.  That will be a phase lasting as long as ten years and will for that time cut into overall proliferation acceptances.

Eighth, some other countries, particularly Russia and China, have done their own autonomous research and development, but their closed communication styles and lack of vetted progress make it difficult to consider their efforts world-class.
With all these things considered, here are our new projections:

For definitions of the levels, see the original NHSTA document at http://www.techrepublic.com/article/autonomous-driving-levels-0-to-5-understanding-the-differences/.

Stay with the Work’s New Age blog for at least quarterly updates on the progress of driverless vehicles and its effect on jobs.  We will publish our fourth forecast next summer.

This was quite a Bureau of Labor Statistics jobs report this morning.  It wasn’t clearly bad, but in some ways the brakes of ever-better reports slammed on.

With 213,000 net new nonfarm payroll positions, we exceeded the publicized projections of 180,000 and 200,000.  However, people hoping for a new unemployment-rate low were beyond disappointed, as the marquee seasonally-adjusted figure jumped 0.2% to 4.0% and the unadjusted rate, reflecting more than the considerable usual difference between May and June, soared from 3.6% to 4.2%.  Those officially jobless for 27 weeks or longer went from 1.2 million to 1.5 million, a huge amount for one good-times month, and the two measures best showing how common it is for Americans to be working, the labor force participation rate and the employment-population ratio, split excellent and neutral outcomes, with the former up 0.2% to 62.9% and the latter holding at 60.4%.  Private nonfarm payroll wages disappointed as well, with a below-inflation 5 cent hourly gain to $26.98.

The American Job Shortage Number or AJSN, the metric showing concisely how many more positions could be quickly filled if people consistently knew they were very easy to get, gained almost one million – a great deal, even with employment regularly dropping from the first month to the second – as follows: 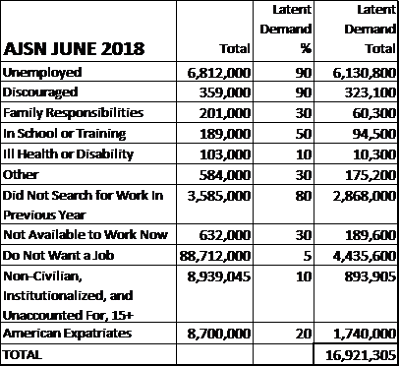 Compared with May, essentially the entire difference came from official joblessness’s rise from 5.76 million.  The second largest contributor was from those wanting work but not looking for it for 12 months or longer, which added 188,000 to the AJSN, and nothing else was significant.  Part of these gains in latent demand were offset by another large drop in those claiming no interest in jobs, down 1.3 million, and those temporarily unavailable, which fell 259,000.  The share of the AJSN from unemployment sharply reversed its recent course, from 32.5% in May to 36.2% here.

It is clear to see much of what happened.  The deservedly well-publicized improvement in available work drew in people in categories some might think reflected permanent disinclinations, mostly those saying they did not want a job at all, which has now fallen 2.3 million since April.  That is why so much of American employment demand is latent – when people hold out hope, their interest picks up, and they move to categories with higher likelihoods of working.  That is also one reason why our prosperity is more tenuous than it looks, and why we cannot ignore these almost 17 million.  If we have a recession, which with the trade war now underway has become more likely, the count of those claiming they will not work will go way over 90 million, but their inherent awareness will not vanish.  In the meantime, while it may not be repeated next month, the turtle, thinking of those 213,000 net new positions and labor-force participation increase, did take a rather modest forward step.

Posted by James B. Huntington at 6:25 AM No comments: