The American Jobs Plan, With Some Infrastructure Too – Where from Here?

We can’t accuse our president of not trying to do enough.  His first 100 days were barely two-thirds over when he proposed what Peter W. Stevenson called in The Washington Post’s April 1st “The Five-Minute Fix” his “second proposal for a signature piece of legislation – this time focusing on more than $2 trillion in proposed spending on infrastructure and jobs.”  But is it the bill we had expected, and why is it so cluttered?

Per Stevenson’s graphic, the bill’s “transportation infrastructure” section includes $115 billion for “highways, bridges, and roads” and $42 billion for “airports, water transit and ports,” adding up to $157 billion or about 7%.  If we add the $85 billion for “public transit,” we’re still less than 11%, and would need almost half of the $80 billion intended for “passenger and freight rail” for heavy infrastructure to make up one-eighth of what Joe Biden wants to spend.  It’s reasonable to add, under Stevenson’s “infrastructure at home” category, the “clean drinking water” ($111 billion), “high-speed broadband” ($100 billion), and “electrical infrastructure” (also $100 billion), to reach $592.375 billion or 26.3%.

The rest is projects of different kinds.  The bill offers $174 billion for “electric vehicles,” which would be marginally acceptable if our federal government, subsidizing and otherwise pushing them for over 40 years with only 4% of auto sales, including hybrids, to show for it, finally gave up if those numbers didn’t greatly change by, say, 2030.  I see $50 billion for “infrastructure resilience” (suspiciously vague), $45 billion for “transportation inequities” (subsidies for largely black neighborhoods?), and $30 billion for “other,” but no true infrastructure there.  The “at home” section also includes $28 billion of “other,” and extends infrastructure’s meaning to include “affordable and sustainable housing” ($213 billion), “public schools, early-learning centers and community colleges” for $137 billion (perhaps worthy, but in an infrastructure bill?).  The same can be said for the remaining four items, “research and development” ($180 billion), “manufacturing and small business” ($300 billion), “workforce development” ($100 billion), and “home and community-based care for elderly and disabled people” ($400 billion).

There is no problem with paying for maintenance we need, but the $1,658,625,000,000 proposed for other things works out to more than $5,000 per American.  I can see why it could be the best technique to bundle things together, to allow congresspeople to vote only once and assure enactment of the parts of the bill they like, but is it the fairest to our citizens?

Here we have several different schemes.  The core infrastructure proposal, that almost $600 billion, could, after some tweaking, get true bipartisan support and could remind us of the days when legislation often passed with healthy majorities.  The others could each stand alone, where Biden would need to choose whether to force them through with little or no Republican support or to soften their content.  That could, at least potentially, give us some idea on what is really important to our representatives and, hopefully by extension, to ourselves.  It also would prevent people from being required to accept, for example, yet more Amtrak subsidies, about which late columnist Charley Reese said a quarter-century ago “either there is a market for intercity trains or there isn’t,” in order to get clearly needed bridge repairs.  It would also let Congress assess the relative value of social programs, and adjust the dollars involved, as they determined which is more important for the 2020s United States, such as more care for older people or better local schools.  It could also facilitate some well-needed debate about how much the jobs required should pay.  All of this work could be bolstered by comments from constituents as well as by more incisive editorializing.

Separating the ideas seems most logical and effective to me.  If I am wrong, what am I not understanding?  Please let me know.

Posted by James B. Huntington at 12:26 AM No comments:

It’s time to take a look at what might be called the large factors and institutions in our economy.  Here are a series of articles which may, or may not, give you insight.

One, “The Looming Bank Collapse” by Frank Partnoy in the July/August 2020 Atlantic, made a case for a new vulnerability.  Before “the financial crisis of 2008,” which “was about home mortgages,” “hundreds of billions of dollars in loans to home buyers were repackaged into securities called collateralized debt obligations, or CDOs.”  These instruments contained paper for mortgages of varying qualities, ranging from those solid and current to others on which no more money would ever be paid.  After “Lehman Brothers went under, taking the economy with it,” these CDOs “fell out of favor,” but “demand” for them shifted to “the CLO, or collateralized loan obligation,” each example of which includes “loans made to businesses – troubled businesses.”  If these instruments collapse in large numbers, per Partnoy they could take the rest of the economy along.

Something we have long implicitly known was articulated in “The Hutchins Roundup,” issued by Brookings on October 15th, namely that the “Stock market is less representative of the economy than it was in the 1970s.”  Two researchers found that publicly traded companies’ shares of total nonfarm payroll employment dropped from 41% in 1973 to 29% in 2019, a cause of fewer people below the top 1% holding securities.  That also may be a root of the market’s strength, as those accumulating more and more money have less need than others to sell.

Maybe I’m missing something, but isn’t “The Puzzle of Low Interest Rates” (N. Gregory Mankiw, The New York Times, December 4th) easy to solve?  The author found six “hypotheses” which “might explain the decline in the natural rate of interest,” five of which with merit, but only grazed the main explanation, that we are awash with capital, and that, combined with low business interest in large projects, means money usually sits in place with low demand.  This situation may change if taxes dramatically increase, and the upcoming infrastructure effort creates millions of jobs, but for now don’t be surprised if the Dow Jones Industrial Average continues to go up more in a typical month than balances in money-market savings accounts rise in a year.

“How much should we worry today about the rising federal debt?,” asked David Wessel in a December 14th Brookings report.  Not much, he said, as our government is paying less than 1% interest on its 10-year obligations.  It would do well though to follow the prudent individual spending practice and “pay for things today that we consume today” such as defense, Social Security payments, and most salaries, but that “we should not hesitate to borrow at today’s very low interest rates for public investments that will pay off in the future,” including infrastructure and human development.  However, low borrowing costs only “buy us some time,” and eventually we will need a reckoning.

Is it true that we have seen “Biden and the Fed Leave 1970s Inflation Fears Behind” (Jim Tankersley and Jeanna Smialek, The New York Times, February 15th)?  Yes, and that was the right thing to do.  As a corollary to money pooling up, inflation is much less of a risk than it was 40 years ago, and rates of 3% to 4% would hardly be disastrous.  With pent-up demand soon to explode, and, per “Janet Yellen Drops Hints” by Andrew Ross Sorkin et al. in the same publication on February 23rd we can expect further stimuli, we’re facing a real test of this theory, but we have a long way to go to see a real problem.

How are bond prices doing, and can we see “What the Bond Market Is Telling Us About the Biden Economy” (The New York Times, February 23rd)?  Per author Neil Irwin, bond returns are not well, as many pay below inflation.  With our presidential administration carefully watching them we can expect generally freer spending, but “the line between too hot and just right is a narrow one,” meaning Washington’s willingness to fund more things may quickly change – if rates do indeed increase.

As for the Federal Reserve itself, we saw that chair “Jerome Powell Promises Not to Take Away the Punch Bowl” (by Neil Irwin, also in the Times, March 17th).  Powell denied the central bank would let forecasts alone, such as what Irwin called “a veritable boom” later this year, stop its monthly $80 billion bond purchases, but would “wait to see actual data.”  That is another optimistic indicator – so let’s get ready to party hearty!  In the meantime, we need to stay safe until our coronavirus independence days – two weeks after our last vaccinations – have arrived.

Fine Progress in March, as Almost All Employment and Coronavirus Numbers Improve Including AJSN, Down Over 700,000 To a Deficiency of 20.5 Million Jobs

This morning’s Employment Situation Summary from the Bureau of Labor Statistics was easy to assess.  We did far better than the forecasted 650,000 net new nonfarm payroll positions with 916,000.  Seasonally adjusted and unadjusted joblessness improved 0.2% and 0.4% respectively to 6.0% and 6.2%.  There were 9.7 million unemployed people, or 300,000 fewer than a month before.  The reduced count of those on temporary layoff included 200,000 of those and is now at 2.0 million.  The two best measures of how many Americans are either working or officially jobless, the employment-population ratio and the labor force participation rate, grew 0.2% and 0.1% and are now at 57.8% and 61.5%.  The number of those working part-time for economic reasons, or keeping short-hours propositions while looking thus far unsuccessfully for full-time ones, lost 300,000 to 5.8 million.  The figure which we now want to get worse, since its height means many low-paying jobs have gone away, average private nonfarm payroll earnings, lost 5 cents to $29.96 per hour.  The sole major statistic not to improve in March, the count of those technically unemployed for 27 weeks or longer, rose 100,000 to 4.1 million.

The American Job Shortage Number or AJSN, the metric showing how many positions, on top of those now open, could be quickly filled if all knew they could get them, had a good month as well, as follows: 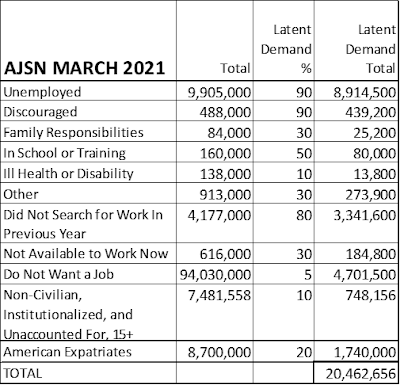 Two-thirds of the AJSN’s 765,000 improvement over February was from lower unemployment, with over 80% of the rest from a reduced count of those wanting work but not looking for it for a year or more.  The share of the AJSN from those officially jobless, 43.6%, was down 0.9%.

It all looks like a great month, and it was, but what’s the catch?  It’s that we can’t forget how far behind we still are.  Compared with March 2020, when the pandemic had already added almost two million to the AJSN, we are still 3.1 million higher, and the difference is broad-based.  Other employment measures, such as the naggingly high new weekly jobless claims most recently at 719,000 or triple a typical pre-pandemic reading, would still be out of place as recently as early last year.  We are doing the job admirably on both fronts, but we have a long way to go.  Accordingly, the turtle, while taking a tendon-taxing step forward, can still see way in front of him territory he already passed through.

Posted by James B. Huntington at 6:42 AM No comments: