The Pandemic: Where Are We Now, and How Can We End It?

On this topic, my objectivity is limited by the milestone I reached yesterday.  It’s now two weeks since my last coronavirus vaccination, so the chance of my getting infected is minimal.  Almost all other American adults can choose to join me.

How encouraging are our recent Covid-19 statistics?  Looking at the charts of 7-day averages of new cases, deaths, and hospitalizations, on the New York Times website, we see different shapes.  The count of new cases stopped drastically declining on February 21st with 66,439, wiggled around mostly downwards, and this past Wednesday reached 52,605.  Hospitalizations bottomed out on March 25th with 39,903 and have been sloping up ever since, with the most recent figure, Tuesday’s, 44,015.  Deaths ended their steady decrease on April 12th with 721, and have been slowly dropping since, to 712 on Wednesday.  Vaccination doses administered went up sort of a craggy mountain to summit April 13th at 3,384,387, and have subsequently been falling, to reach 2,630,407 yesterday.  All of these numbers show a maturing, so to speak, of the recovery, with disease results down but not out and the tally of vaccinations, including the Times’s figures (conflicting with others who say it is higher, claiming 43% with at least one dose but 13% more needing another) indicating that we are beginning to run out of customers.

Worldwide, we are only now reaching all-time highs in new daily cases, and are almost at that level with daily deaths.  As of yesterday, the map looked like this, with darker colors meaning higher new per-capita infections: 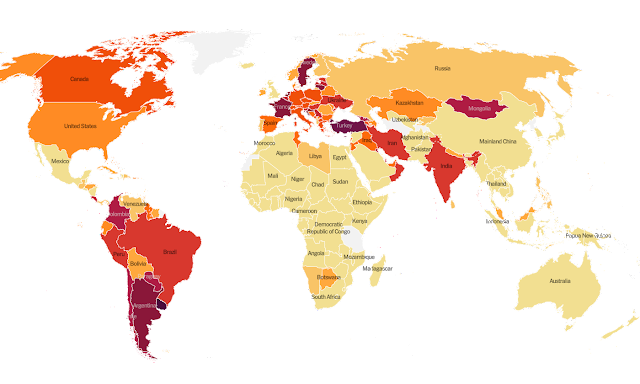 As you can see, Europe and South America are generally doing the worst. We have read about India setting national records, but yesterday’s 349,378 all-time-high average daily new cases there is barely one-third of the highest United States percentage.  The American vaccination rate, even if it levels off, should assure that our country will continue to improve.

Otherwise, what’s in the coronavirus news?  Per Rebecca Robbins in the April 25th New York Times, “Millions Are Skipping Their Second Doses of Covid Vaccines.”  A discouraging piece, with the major causes being concern about side effects, snags with places running out of specific products between doses, and decisions that the second shot was unnecessary.  The good part is that 92% of people having  one Pfizer or Moderna dose have returned for the second, but 8% not is still too high.

One idea to get vaccination rates higher was presented by Ben Mathis-Lilley in the April 23rd Slate: “There Is a Glaringly Obvious Way to Get Everyone to Take the Vaccine.”  Per the subtitle, “it’s money.”  An Oxford professor and a Democratic presidential candidate endorsed payments of $1,000 and $1,500 respectively.  The author bounced around the idea, ultimately agreeing with it, but two of his counterpoints, that it would encourage people to wait for payments for such things in the future and that it could get them thinking it is riskier than it actually is, along with concern about stiffing or going through $100-$150 billion for each 100 million Americans already vaccinated, carry the day.

Now is the right time for “As Virus Rages Abroad, Biden Promises to Ship Millions of Vaccine Doses” (Sheryl Gay Stolberg, The New York Times, April 26th.)  Already our production capability is way beyond the number of doses we need, so we can and should continue making them for free export.  We can’t be expected to provide all of the vaccine other countries need, appeals to guilt are inappropriate, and whining about sending less being like “showing up to a four-alarm fire with an eyedropper full of water” is grotesquely inaccurate, but we can make a massive difference, by saving possibly millions of lives, just by keeping the factories going.

My clear answer to Aaron E. Carroll’s April 27th New York Times question, “When Can We Declare the Pandemic Over?”, is that it will end for us individually.  Per Carroll, “normal has never meant “perfectly safe,”” “a safer world will likely still have Covid-19 in it,” and “if we can get the pandemic to a point that a vast majority of people who become sick get well, that the number of people who are hospitalized and dying is low and that this really isn’t any worse than your average seasonal respiratory virus, then it’s time to start seriously relaxing our restrictions.”  We should expect and encourage a falling-away of government regulations, with individual businesses choosing what rules to have and, of course, consumers doing what they think is right.

And as for us?  In all, if you are not getting vaccinated because of religious beliefs, that is the price you pay for them.  If you are holding back because you believe some sort of conspiracy, such as a recurrence of the generations-ago Tuskegee abuses, you are a fool.  If you think one dose is enough, you are practicing medicine without a license.  If logistical problems have stopped you from getting your second shot, you need to aggressively overcome them.  If you fear general side effects, you have the cart in front of the horse.  If you are waiting for some kind of herd immunity, you are misguided.  If you think that because our last president did not take the pandemic seriously you do not need to be protected, you are worse than that.  If you have a true medical reason, you have my sympathy.  The pandemic is over for me – will it soon be over for you?