What a jobs report!

On the downside were the number of people working part-time for economic reasons, or keeping such while looking thus far unsuccessfully for full-time opportunities, which gained back 300,000 of its 700,000 June fall to 3.9 million, and average hourly private nonfarm payroll employees’ earnings, which, although the highest percentage increase in years, remained below inflation with a 19-cent gain to $32.27.  The two measures of how common it is for Americans to have jobs or be one step away, the employment-population ratio and the labor force participation rate, increased 0.1% and decreased the same amount respectively to end at 60.0% and 62.1%.

The American Job Shortage Number or AJSN, the Royal Flush Press metric published for 10 years showing how many more positions could be easily filled if all knew they were as easy to get as running an ordinary errand, was almost unchanged – up 23,000, as follows: 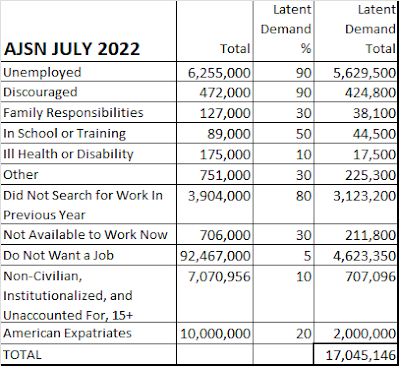 No category’s contribution to latent demand changed more than 78,000.  Compared with July 2021 the AJSN has dropped three million, with almost 90% of that from lower official joblessness.  The share of the AJSN from those unemployed edged down 0.4% to reach 33.0%, again less than one third.

Per the New York Times, the 7-day average of new Covid-19 cases increased 26% from June 16th to July 16th to 130,170.  Other daily pandemic numbers had similar changes, with the same average of deaths up 32% to 424, hospitalizations up 35% to 40,611, and number of vaccinations administered down 25% to 233,440.  The worsening coronavirus is an increasing cause for concern, but is still well short of indicating that people are being imprudent by working.

So what really happened?  People, though fewer than in the previous month, rejoined the workforce and, this time, consistently got jobs.  Over 15% of those reporting they were officially unemployed long-term in June had lost that status by July.  Adjusted joblessness got even lower.  Pay almost caught up with inflation.  More people, over 80,000, left the institutionalized, armed services, and off-the-grid category above, which has shed an amazing and telling 2.3 million, or almost one quarter, in the past year alone.  Workers are coming back, and they are finding success, hours, and more money.  Accordingly, the turtle strained legs as he took a lengthy step forward.

Posted by James B. Huntington at 6:45 AM No comments: