A confusing title perhaps, but this morning’s Bureau of Labor Statistics Employment Situation Summary was as well.  It started with 266,000 net new nonfarm payroll jobs, about 700,000 lower than the only projection I saw, but more broadly the report played like 660,000 or so more were on the job.  That was the difference between March’s and April’s “number employed,” meaning that we added about 400,000 net positions either on farms or not on payrolls.  Some of the other metrics reflected a strong month, with the labor force participation rate and employment-population ratio, now 61.7% and 57.9%, up 0.2% and 0.1% respectively, seasonally unadjusted unemployment off 0.4% to 5.7%, and the count of those working part-time for economic reasons, or holding short-hours positions while thus far unsuccessfully seeking longer ones, crashed almost 600,000 to 5.2 million.  The number of those out for 27 weeks or longer stayed at 4.2 million.  Figures getting worse included the adjusted unemployment rate up from 6.0% to 6.1%, the tally of those jobless up 100,000 to 9.8 million, and the number of people on temporary layoff increasing the same to 2.1 million.  The hardest to interpret was “average hourly earnings for all employees on private nonfarm payrolls” up 21 cents to $30.17 – such gains have lately been bad, as they have reflected lower-paid people disproportionally losing their jobs, but this time it may mean higher pay in general.

The American Job Shortage Number or AJSN, the measure showing how many new positions could be quickly filled if all knew they were truly available, had a large decline to the following: 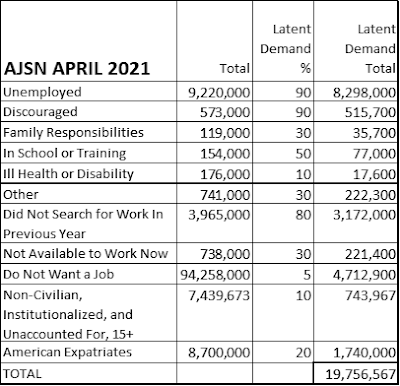 Almost 80% of the improvement from March came from lower official unemployment, but the count of people not searching for work for a year or more contributed over 100,000.  The year-over-year comparison, with the worst employment month of the pandemic, showed a 14.5 million improvement from 34.3 million, with over 2½ million of that from statuses other than straight joblessness.  The share of the AJSN from unemployment was 42.0 percent, down 1.9%.

How can we sort all of this out?  For one thing, we are no longer improving across the board.  We’re reaching limits both on people accepting vaccinations and on employers’ willingness to pay more.  We are nowhere near herd immunity, however you define that, and will not get there until our share of fully vaccinated people, still only 33%, more than doubles.  Legal reopenings, such as the one authorized for later this month in New York City, will help, but only to the extent that customers return.  The rest of the year, then, is murkier than I thought it was a year ago, and does not look as spectacular.  For now, though, the turtle did take a real step forward.

Posted by James B. Huntington at 6:59 AM