A Banner Jobs Report, But We Still Have a Long Way to Go – AJSN Shows Latent Demand for 20 Million More Positions

There were high expectations for this morning’s Bureau of Labor Statistics Employment Situation Summary, and it exceeded them.  The 943,000 net new nonfarm positions were about 100,000 more than the consensus projection.  Unemployment, up last month from people rejoining the labor force but not getting jobs, fell 0.5% and 0.4% seasonally adjusted and unadjusted, and reached, respectively, 5.4% and 5.7%.

The other key numbers also showed robust improvement.  The total number of unemployed dropped 800,000 to 8.7 million.  The total on temporary layoff shed a third to reach 1.2 million.  The count of people with long-term joblessness, or 27 weeks or longer, lost 600,000 to 3.4 million.  Those working part-time for economic reasons, or keeping that type of employment while thus-far unsuccessfully seeking full-time work, were only 100,000 less numerous to get to 4.5 million, but held last time’s 700,000 improvement.  Average private nonfarm payroll earnings, including an adjustment to June’s data, were up 14 cents, more than inflation, and are now at $30.54.  The two best measures of how many Americans are working or one step away, the labor force participation rate and the employment-population ratio, gained 0.1% and 0.4% to 61.7% and 58.4%.

The American Job Shortage Number or AJSN, the gauge of how many new positions could be absorbed if all knew that getting one would be quick and easy, improved 700,000, as follows: 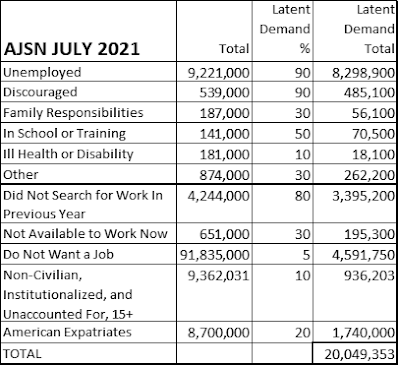 Six-sevenths of the AJSN’s loss was from lower official unemployment, with most of the rest from fewer discouraged workers.  One change is lower population growth, which has so far cut the break-even for additional monthly jobs from approximately 130,000, where it was for most recent years, to about 60,000.  The share of the AJSN from unemployment fell 1.5% to 41.4%.

The state of the Covid-19 pandemic, over the same time assessed by the employment numbers of June 16th to July 16th, generally worsened.  Per the New York Times, the seven-day average of new daily cases jumped 143% to 30,901, and hospitalizations rose 20% to 22,641.  The same measure of deaths, though, decreased 16% to 280.  Daily vaccinations, reflecting a dwindling customer set most of all, declined 55% to reach 519,678.  Since the shots are available on a walk-in basis all over the country, there can be no reasonable thought that the good numbers above were at the expense of a worsened coronavirus response.

A fine jobs report month indeed, but we need to stay aware of our entire situation.  We still have 4.9 million fewer jobs than before the pandemic.  The AJSN is 4.2 million higher than it was in February 2020, and is greater than it was two issues ago.

In late May and early June, many people newly sought but did not find work.  Over the month since, lots of them did, without needing to compete with as many re-arrivals.  Still, we’re nowhere near back, and weekly state unemployment claims, hovering around 400,000, continue to reinforce that.  The turtle took another big step forward, but where we were a year and a half ago and long before remains far in front of him.

Posted by James B. Huntington at 7:06 AM