September’s Employment Data: A Pitiful Number of New Jobs Conflicts with Strong Apparent and Real Progress Elsewhere, as Latent Demand, Per the AJSN, Dives 1,200,000 to 17.7 Million

Another Bureau of Labor Statistics Employment Situation Summary, another fall in unemployment, another disappointing count of net new nonfarm payroll positions.  That came in at 194,000, this time just over one third of a published prediction, which was 500,000.  Doesn’t look that bad, but…

Well before the survey weeks, the federal $300 unemployment add-on ended.  We have been seeing, especially from conservatives but also moderates, how vast numbers of Americans would rush back to the workforce when they lost that extra money.

I went so far as to predict a banner jobs-adding month, strong also from higher wages, more vaccinations, and more consistent safety for the prudent.  I was so high on those factors that I considered any gain below 1.5 million to indicate little effect from the add-on’s sunset, and predicted about a million.

Not close.  We now have no reason whatever to think that this supplement kept people away from workplaces.

So what numbers turned up?  Seasonally adjusted unemployment fell a healthy 0.4% to 4.8%, with the unadjusted version, helped by many people as usual returning to work with the new school year, down 0.7% to 4.6%.  The total number of jobless decreased 700,000 to 7.7 million, with those out 27 weeks or longer dropping 500,000 to 2.7 million and those on temporary layoff 200,000 lower to 1.1 million.  The count of people working part-time for economic reasons, or holding on to one or more of those opportunities while unsuccessfully seeking a full-time one, though, held at 4.5 million.  The two indicators of how common it is for Americans to be working or one step away, the labor force participation rate and the employment-population ratio, were mixed, with the former off 0.1% to 61.6% and the latter up 0.2% to 58.7%.  Average hourly private nonfarm payroll earnings, reflecting larger labor demand and higher pay, were up 12 cents, actually less than inflation, before any adjustment, and now sit at $30.85.

The American Job Shortage Number or AJSN, the metric showing how many more positions could be quickly filled if all knew getting one would be as easy as getting a pizza, showed latent demand fell 1.2 million, as follows: 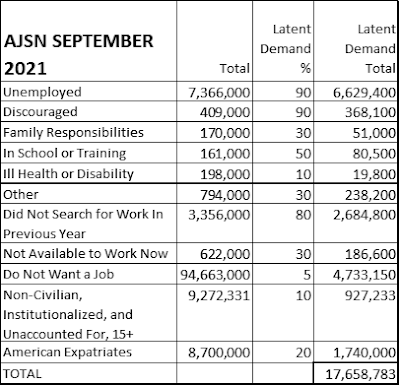 Almost 1.1 million of the AJSN’s drop was from lower official unemployment.  The count of those not looking for work for the past year contributed more than the remainder, and almost everything else got higher.  Most noteworthy was the 650,000 gain in those claiming no interest in working, and that, along with others, show that the unemployment drop came not only from those with that status but from those leaving the labor force.  With the AJSN taking big steps toward its prepandemic levels, it is now 5.3 million less than a year ago, with the marginal statuses much lower.  The share of the AJSN from those officially jobless was 37.5%, down 3.3% and meaning that of those not now working who would actually take new, fillable jobs, five-eighths would not be what we consider unemployed.

On the Covid-19 side, the bad effects, yet becoming less common since, were still getting higher at survey time.  Per the New York Times, from August 16th to September 16th the seven-day average of new cases rose 6% to 150,376, that of deaths soared 180% to 1,969, and that of hospitalizations increased 18% to 97,413.  The same number of vaccinations administered was almost unchanged, reflecting fewer people without them and willing to have them offset by those changing their mind on higher infection numbers, gaining 1% to 773,763.  With the low number of new jobs, though, it is clear that few people were unduly endangering themselves for paychecks.

What can we make of this mess?  Clearly, most of those wanting to work took their time getting it.  Those who toyed with finding employment and weren’t successful continued to return to the shelf – and the number of those saying they wouldn’t welcome jobs, which we know is partially contingent on opportunities, again pushing all-time highs is no sign of rising prosperity.

Overall, September was neither as bad as the puny 194,000 nor as good as the unemployment-rate drops.  We are slowly improving, with the possibility of further, much larger gains over the next few months fully alive.  This time, however, the turtle managed only a baby step forward.

Posted by James B. Huntington at 7:03 AM