This Morning’s Jobs Data: A Calm, Normal Recovery Month, For Once – AJSN Shows Latent Demand Down 400,000 to 17.3 Million

With the peculiar Bureau of Labor Statistics Employment Situation Summary results we have been getting, capped by the previous one, it was reassuring to see a report showing that we improved in an orderly and once-expected fashion.

The number of net new nonfarm payroll positions moderately exceeded the published 450,000 projection with 531,000.  Seasonally adjusted and unadjusted unemployment improved 0.2% and 0.3%, coming in at 4.6% and 4.3%, the latter not from normal variation.  The number of jobless fell 300,000 to 7.4 million, with the count of those on temporary layoff holding at 1.1 million.  The long-term unemployed fell a large 400,000 to 2.3 million, and those working part-time for economic reasons, or keeping short-hours positions while looking thus far unsuccessfully for full-time ones, shed 100,000 to 4.5 million.  The two measures showing best how common it is for Americans to be working or one step away, the employment-population ratio and the labor force participation rate, were narrowly mixed, with the former up 0.1% to 58.8% and the latter still 61.6%.  Average hourly private nonfarm payroll wages increased 11 cents, roughly matching the inflation rate, and are now $30.96.

The American Job Shortage Number or AJSN, the statistic showing how many more positions could be quickly filled if all knew they were available and easy to get, improved just over 400,000 and broke down as follows: 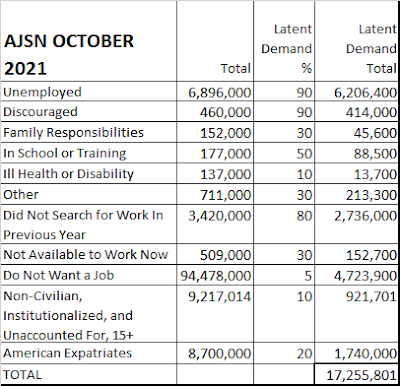 The unemployed population accounted for a bit more than the entire reduction, with all of the other categories combined offsetting it by less than 25,000 – none individually changed the metric by more than 52,000.  The share of the AJSN from official unemployment came in at 36.0%, down from 37.5%.

Compared with a year ago, the AJSN is almost 3.8 million lower, with almost exactly all of that from lower unemployment and a reduced count of those wanting work but not looking for it for a year or more.  Our improvements now are, understandably, much less than they were at that pre-vaccination stage of the pandemic.

On the coronavirus front, showing that our good employment month was not at the expense of more Covid-19 activity, per the New York Times from September 16th to October 16th the 7-day average daily number of new cases dropped 44% to 83,703, deaths figured the same way fell 22% to 1,529, hospitalizations were off 37% to 61,281, and the number of new daily vaccinations, despite our creep toward saturation, still managed a 4% increase to 803.960.

Feels good, doesn’t it?  Compared with just before the pandemic started, we still are several million jobs short and over two million heavy in the AJSN, but we made clear progress.  Given that we know there will be no sudden jump into maximum employment, we can’t ask for more except consistency at this level.  Accordingly, I saw the turtle take a big step forward.

Posted by James B. Huntington at 6:52 AM