November Jobs Report: Another Fine Month, But Without the New Positions This Time

That outcome may not seem possible, but it’s what happened with this morning’s Bureau of Labor Statistics Employment Situation Summary.

The number of net new nonfarm positions grew a meager but still valuable 210,000, far below the three projections, all between 500,000 and 600,000, I saw.  That was the extent of the bad news.  Seasonally adjusted and unadjusted joblessness each shed 0.4%, to reach 4.2% and 3.9%.  There were half a million fewer unemployed people than the month before, reaching 6.9 million.  The count of those on temporary layoff fell 300,000 to 800,000, and those out 27 weeks or longer lost 100,000 and is now 2.2 million.  Those working part-time for economic reasons, or keeping such positions while looking thus far unsuccessfully for full-time ones, numbered 4.3 million or 100,000 less.  The two measures best showing how common it is for Americans to be working or officially jobless, the labor force participation rate and the employment/population ratio, improved substantially and are now at 61.8% and 59.2%, up 0.2% and 0.4% respectively.  The weakest measure here may have been average private nonfarm payroll wages, increasing 7 cents an hour, below inflation, to reach $31.03.

The American Job Shortage Number, the statistic showing how many new positions could be filled quickly if all knew they would be easy and routine to get, had another fine month, dropping 568,000 to get to the following: 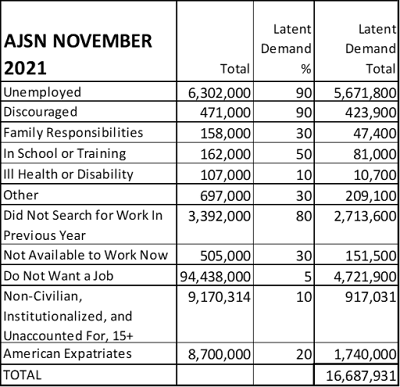 Eight of eleven components contributed less this time, with about 90% of the drop from lower formal unemployment.  The rest was broad-based.  This time, only 34% of the AJSN came from that same piece, meaning that nearly two-thirds of people without employment who would take easily available new jobs would have other statuses.  Compared with a year before, the AJSN has shed almost 4.3 million, with all but 700,000 from reduced official joblessness.

On the Covid-19 front, per the New York Times, the seven-day weighted average of new cases rose 2% from October 16th to November 16th, to reach 85,154.  Deaths measured the same way, though, lost 30% to 1,063, and hospitalizations dropped 23% to 47,852.  The number of vaccinations, including booster shots, jumped 70% to get to 1,368,939.  With the trends so generally positive, there is no reason to think that more people are excessively endangering themselves by working in pandemic-unsafe conditions.

So how could this report be so good with the count of new jobs, treated by many as the most important number it contains, disappointing?  The marginal attachment statuses above are improving little, and the count of those claiming no interest in working, which soon may contribute more to the AJSN than the unemployed, has been irregularly but clearly increasing.  Otherwise, there are gaps between the number of jobs and the number of people with them, specifically that a rising share of the employed have more than one position, and the non-civilian et al. category above, including people off the grid or not wanting to be found, has settled at about a million and half higher than it was pre-pandemic.  Still, the report was strong indeed, and the unemployment rates are running, not walking, toward pre-coronavirus levels.  In light of that, the turtle took another big step in the right direction.

Posted by James B. Huntington at 7:02 AM