December’s Jobs Numbers: Almost a Repeat of November’s Improvements, But with a Reservation – AJSN Down to 16.3 Million as Latent Demand for Work Descends to Almost Pre-Pandemic Levels

Not too often have I seen back-to-back Bureau of Labor Statistics Employment Situation Summaries this similar.

We start with the current marquee number, that of net new nonfarm payroll positions, which again came in well below the consensus prediction, this time 199,000 or half of multiple 400,000 estimates.  The rest, though, were strong.  Seasonally adjusted and unadjusted unemployment shaved 0.3% and 0.2% to reach 3.9% and 3.7%.  There are now 6.3 million officially jobless, off 600,000 from last month’s initial report, and although the count of people on temporary layoff was 12,000 higher, those out for 27 weeks or longer fell another 200,000, to 2.0 million.  The two measures of how common it is for Americans to be working or one step away, the employment-population ratio and the labor force participation rate, logged 0.3% and 0.1% improvements to 59.5% and 61.9%.  The number working part-time for economic reasons, or holding that kind of job while looking for something full-time, ditched 400,000 to 3.9 million.  Average hourly private nonfarm payroll wages did better than inflation this time, up 28 cents since the last report to $31.31.

The American Job Shortage Number or AJSN, the statistic showing how many more positions could easily be filled if all knew they were easy to get, got 348,000 better as follows: 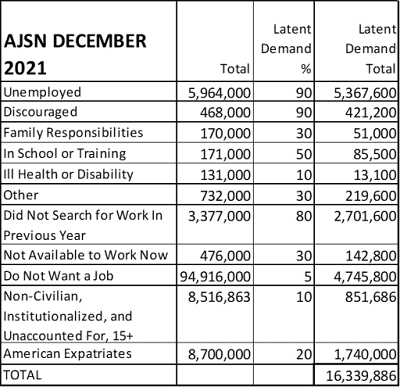 All but 44,000 of this month’s improvement came from lower official joblessness, with the other components light and mixed.  The share of the AJSN from this piece dipped 1.2% to 32.8%, meaning that, of people not working now, more than two thirds of latent demand for new positions comes from those not eligible for such benefits.  Compared with a year before the AJSN is down 4.9 million, with almost exactly four million of that from those unemployed, almost 700,000 from a lower count of those wanting work but not looking for it for a year or more, and over 100,000 apiece from people discouraged and in the “other” category above.

On the pandemic side, although the Omicron effect was only starting we saw, for the first time in months, a cause for concern.  Per the New York Times, between November 16th and December 15th or 16th, the seven-day weighted average of new daily cases jumped 44% to 122,368, people hospitalized from Covid rose 43% to 68,222, and pertinent deaths increased 22% to reach 1,302.  The same measure of vaccination doses given, though, was up 23% to 1,799,583.  The worsening numbers, here including deaths, suggest there now may be a real increase in people exposing themselves to the virus at workplaces who should not be.

How are we looking?  Once more, we must not confuse erroneous forecasts with poor results.  Our country’s population growth has slowed considerably in the past two years, and now we only need about 50,000 net new jobs each month to cover it.  We got four times that.  The other figures, including the AJSN, are quickly heading for where they were two years ago.  Since we know now that the Omicron variant, accounting for the overwhelming majority of new cases, is much less deadly than those before, it is easier for people to justify risking their health at work.  Whether that is worth it is for you to decide.  In the meantime, the turtle took another robust step forward.

Posted by James B. Huntington at 6:52 AM