Four weeks ago, I predicted this morning’s Bureau of Labor Statistics Employment Situation Summary would again be especially strong.  Was it?

The American Job Shortage Number or AJSN, the measure of how many new positions could be quickly filled if all knew they were easy to get, decreased 402,000, as follows: 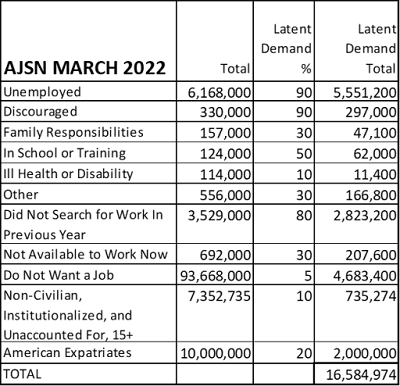 The effect of a lower number of unemployed was significantly offset by more people wanting to work but not looking for it for a year or more.  That was a clear indication that those who in February said they did not want jobs, which decreased over 600,000 in March, came back to the workforce.  The other factors above significantly improved, with their AJSN effects largest for those discouraged and those in school or training.  The share of the AJSN from those officially jobless fell from 35.9% to 33.5%, meaning that essentially two-thirds of new job acceptors would not have been what the Bureau of Labor Statistics considered unemployed.

Compared with a year before, the AJSN has dropped almost 3.9 million, 3.4 million of that from those jobless, half a million from a lower count of people interested in work but not searching for it for at least 12 months, and the other statuses collectively little changed.

On the pandemic front, the differences in seven-day rolling daily averages between February 15th or 16th and March 16th all showed the dramatic fading of the Omicron variant, with new cases down 75% to 31,216, deaths off 46% to 1,263, people hospitalized dropping 70% to 25,558, and vaccinations, including boosters, 54% lower at 237,025.  There is scant reason, and even less day by day, to think a significant number of people are taking undue risks by working.

So how good was it… really?  It wasn’t as super-strong as February’s, and the two-month trends of more people counted as employed without the full-time work they want and pay raises not covering increasing prices are causes for concern.  Yet our unemployment rates are only a few tenths of percent higher than they were just before Covid, and much of the effect of higher oil and food prices from the Ukraine war, three weeks old at survey time, is already baked in.  How we do from here will depend on how many of those 600,000-plus new entrants find work.  If they do, April should match or exceed March, but if they don’t, we may more or less break even next time.  For now, though, once again the turtle took a good step forward.

Posted by James B. Huntington at 7:45 AM