Another Good Jobs Report, with AJSN-Shown Latent Demand Down Another 500,000 to 16.1 Million

After some wild Bureau of Labor Statistics Employment Situation Summary editions, it’s good in a way to see one that matched predictions and was consistent with common sense.

The two projections I saw for net new nonfarm payroll positions, 380,000 and 390,000, were almost right on this morning’s 428,000.  There is a large usual difference between how many people are working in March and April, as while the seasonally adjusted employment rate held at 3.6% the actual or unadjusted figure fell from 3.8% to 3.3%.  Other key statistics were mixed.  On the good side, the count of officially jobless dropped 100,000 to 5.9 million, and the total of those working part-time for economic reasons, or holding on to that kind of work while seeking full-time opportunities, shed 200,000 to 4.0 million.  Losers were those on temporary layoff, up 66,000 to 853,000, those out of work for 27 weeks or longer, up 100,000 to 1.5 million, average private nonfarm payroll wages, up 12 cents per hour to $31.85 but well below inflation, and the two measures of how common it is for Americans to be working or one step away, the labor force participation rate and the employment-population ratio, down 0.2% and 0.1% to 62.2% and 60.0%.

The American Job Shortage Number or AJSN, the measure of how many new open positions could be quickly filled if all knew they were routinely easy to get, lost 501,000 to reach the following: 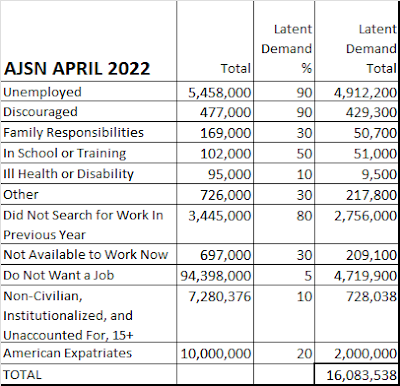 The share of the AJSN from those unemployed by official definition is now 30.5%, down from 33.5%, meaning that almost 70% of nonworking people who would take freely available jobs have other statuses.  That is historically very low.  Compared with a year ago, the AJSN has lost 3.7 million, all but 300,000 of that from lower official unemployment.

On the pandemic side, the 7-day average of Covid-19 cases increased 18% from March 16th to April 15th (data was not available for April 16th) to 37,003, the same for deaths down 63% to 466, people hospitalized for this ailment off 42% to 14,868, and total number of vaccinations, most commonly newly-available boosters, up 203% to 718,910.  Given the still-low if rising case count, the geographical concentration of recent activity, and most of all the plummeting death numbers, it is still clear that few are taking undue risks to stay on the job.

How can we size up April?  In some ways we didn’t go anywhere – pay is still lagging behind inflation, more people left the labor force, and the shortest and longest joblessness figures worsened.  On the other hand, that 428,000, about ten times enough to cover our smaller population growth, is nothing to take for granted.  We’re doing well, though it is obvious where we need to improve.  This time the turtle took a medium-size step forward.

Posted by James B. Huntington at 6:39 AM