It Would Sure Be a Strange Recession: 372,000 More Jobs, 3.6% Unemployment, People Pouring Into the Labor Force – AJSN Says We’re 17 Million Positions Short

You can hardly scan a newspaper business section without seeing references to a recession – probable, almost certain, here already.  I know that we can declare one when the Gross Domestic Product drops for two consecutive quarters, and the last quarter qualified, but if that happens would we really have an economic downturn in spirit?  This morning’s Bureau of Labor Statistics Employment Situation Summary voted no.

Once more, we blew the top off published estimates of the gain in nonfarm payroll employment.  I saw 268,000 and 270,000, and it came in at more than 100,000 over either.  Seasonally adjusted joblessness sat at 3.6% for the third straight month, not a bad rut, and with the change from above-average-jobs May to below-average June, the unadjusted number increased 0.4% to 3.8%.  That included 827,000 on temporary layoff, up 17,000, and 1.3 million out for 27 weeks or longer, down 100,000.  The count of those working part-time for economic reasons, or holding such positions while looking unsuccessfully for full-time ones, ditched last month’s 300,000 gain and 400,000 more, and is now at 3.6 million.  The number of employed gained only a tiny percentage, 69,000 to 158,678,000, but still did not lose.  The two measures of how common it is for Americans to be either working or one step away, the employment-population ratio and the labor force participation rate, fell off 0.2% and 0.1%, seasonally, to reach 59.9% and 62.2% – for the same reason, the count of unemployed shed 100,000 to 5.9 million.  Despite a continually aging population, the number of people not in the labor force fell 700,000 to reach 98.8 million.  The only truly bad news was on average private nonfarm payroll earnings, which improved but still did not match inflation, with a 13-cent hourly gain to $32.08.

The American Job Shortage Number or AJSN, the metric showing how many more positions could be quickly filled if all knew they would be easy to get, gained almost 600,000, as follows: 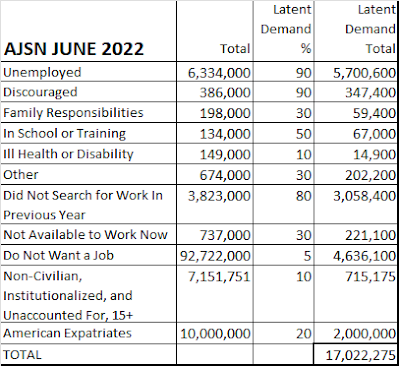 Compared with May’s results, the number of unemployed pushed the AJSN 700,000 higher, with everything else, mostly an improvement in those wanting work but not looking for it for a year or more, partially offsetting that.  Year-over-year, the AJSN fell 3.7 million, 3.2 million from the jobless count and the rest mostly from fewer people discouraged, fewer people not looking, and fewer in armed services, institutions, and off the grid, partially balanced by more American-citizen expatriates.  A hair over one-third – 33.4% – of the most recent AJSN is from the official unemployed, up 3.3%.

What’s the real story this time?  We’re still improving.  More and more people are going back or at least trying to do that, the latter still held off by too-frequent too-low pay.  Yet we added about seven times as many employed people as our population increase needs, and, despite many not working yet, absorbed them without boosting that 3.6% jobless rate.  The AJSN rose again only because more people said they want to work – once they hook on, especially likely if more employers raise wages and turn perpetual “job openings” into actually filled opportunities, it will come down.  Those with axes to grind may, if GDP falls again, tout the resulting recession as a sign that our employment situation is poor, but it is not.  The turtle took another vigorous step forward.

Posted by James B. Huntington at 6:55 AM