The Pandemic: Three Whirlwind Weeks, and Where We Are Now

This topic does not allow articles, updates, and blog posts a long life.  I posted with accuracy on it on February 26th, but most of that is now obsolete.  Why?

The first reason is that, per Noah Welland and Sharon LaFraniere in the February 27th New York Times, “F.D.A. Clears Johnson & Johnson’s Shot, the Third Vaccine for U.S.”  This American-Belgian product only requires one application per person, and, as of the article’s date, its consortium “has pledged to provide the United States with 100 million doses by the end of June,” allowing, by July 31st, “more than enough shots to cover any American adult who wants one.”  Three days later we heard from Elliot Hannon in Slate that “Merck Will Reportedly Start Manufacturing Johnson & Johnson Coronavirus Vaccine,” including sequestering “two facilities,” one of which will be dedicated to making the drug, with people at the other providing ““fill-finish” services, the last stage of the production process during which the vaccine substance is placed in vials and packaged for distribution.”  This kind of cooperation is exactly what seemed to be missing in December and January, and will make a huge difference in both quality and saving of lives.  A noble move.

The result of these two news items, written by Sheryl Gay Stolberg et al. in The New York Times, also on March 2nd, was that “Biden Vows Enough Vaccine ‘for Every Adult American’ by End of May.”  The president Joe, knowing what he did about the supply of the Pfizer-BioNTech and Moderna products as well as the new one, made what then looked like an aggressive statement or stretch objective but, in the time since, has seemed increasingly realistic.  The first two vaccine manufacturers “pledged last month to deliver together enough to cover 200 million Americans by that date,” and the U.S. has committed to buy 600 million doses from these two companies alone.

Almost immediately after it was approved, the Johnson & Johnson vaccine got into a controversy.  The Moderna and Pfizer-BioNTech drugs were rated at 94 and 95 percent “efficacy,” whereas Johnson & Johnson’s came in at only 72 percent.  As a result, probably also due to this product’s requiring only one dose, people started saying it was inferior.  Not so, said Hilda Bastian in a well-documented seven-plus-page March 7th exposition in The Atlantic.  Bastian’s main points were that first, the American-approved drugs are “essentially perfect when it comes to preventing the gravest outcomes,” with “zero cases of hospitalization or death in clinical trials for all (three) of these vaccines” (italics hers); second, the products do vary in “preventing illness” and frequency of “adverse reactions”; third, the rates of bad outcomes have been so tiny that in some cases adding only one infected test subject would have dramatically changed that vaccine’s published numbers;  and fourth, despite failure rates being microscopic for all of them we cannot be assured that will continue forever, but the three are all superb.

Two other recent articles were noteworthy.  In “The Pandemic Economy and the Rise of the ‘Noxious Contract,’” in the March 9th New York Times, David Grusky discussed how we could compensate people choosing to work in dangerous settings.  With the federal government’s Occupational Safety and Health Administration (OSHA) almost invisible, many environments, perhaps sources of the majority of the American total of 29.6 million coronavirus cases so far, have been unacceptably risky.  Biden is working to fix that through the Labor Department and by “trying to ensure that workers who turn down health-jeopardizing employment can still qualify for unemployment insurance,” and Grusky suggested other measures, particularly a “new G.I. Bill” allowing workers in infection-hazardous jobs military veteran’s benefits and subsidized housing qualification.  Katherine J. Wu’s “You’re Not Fully Vaccinated the Day of Your Last Dose” (The Atlantic, March 17th) reminded us, backed up with a description of how vaccines work, that two weeks need to elapse after that.

What are the latest American pandemic statistics?  On the New York Times website for March 17th, the 7-day averages of daily new cases, daily deaths, and number of people hospitalized were 55,001, 1,260, and 41,275 respectively.  Twelve percent of Americans have now been fully vaccinated, with another 11% having received one dose and needing another.  As of yesterday, the 7-day average of people getting vaccines each day was 2,503,771.  Compared with the worst overall day of the pandemic, January 9th, the four average numbers above are, in order, down 78%, down 60%, down 70%, and up 611%.  Here is a map, rather changed since the last one I posted, of average new daily cases by county, with those in white showing none, those with the lightest color otherwise less than 10 per day per 100,000 population, and the most intense over 250 per 100,000: 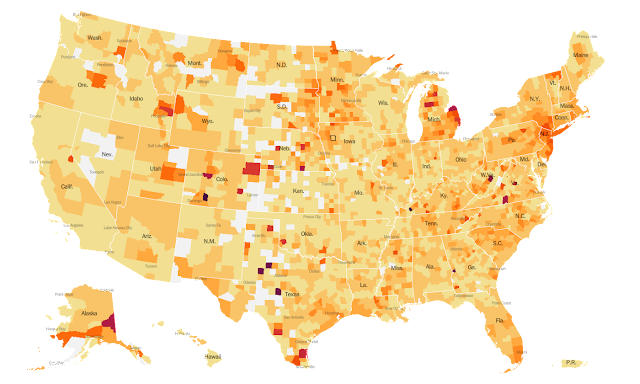 These figures show that we are doing the Covid-stopping job in all respects.  As long as we stay the course with getting vaccinated, practicing social distancing, and wearing masks, we will most likely be out of this by early summer.  Let’s get there!