I didn’t know what to expect in this morning’s Bureau of Labor Statistics Employment Situation Summary.  The only estimate I saw on net new nonfarm positions was 182,000, and knew the pandemic had eased considerably, taking pressure off any need for employment progress.  So what happened?

We came in at 379,000 new positions as above, more than double the often highly accurate Fox News projection.  The other results were indifferent.  Seasonally adjusted unemployment edged down from 6.3% to 6.2%, with the unadjusted version, showing we are in a generally below average month for work, fell from 6.8% to 6.6%.  As of mid-February we had 10.0 million officially jobless, down 100,000, but the share of people on temporary layoff was off 500,000 to 2.2 million, meaning that those unemployed without that status actually numbered 400,000 more.  Those out for 27 weeks or longer rose 100,000 to 4.1 million, and those working part-time for economic reasons, or keeping short-hours positions while thus far unsuccessfully seeking longer-hours ones, gained the same amount and is now 6.1 million.  The two measures of how common it is for Americans to be working or one step away, the labor force participation rate and the employment-population ratio, held and gained 0.1% respectively to reach 61.4% and 57.6%.  Average hourly earnings for all employees on private nonfarm payrolls, a reverse indicator in these economic conditions since higher pay means fewer low-end jobs, gained 5 cents per hour, a hair above inflation, to $30.01.

The American Job Shortage Number or AJSN, the indicator showing how many new positions could be quickly filled if all knew they would be easy to get, improved from 21,792,000 as follows: 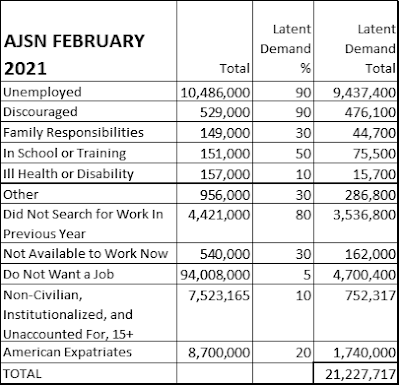 Most of this month’s drop was from lower official unemployment, with about 100,000 apiece from reduced numbers of people claiming discouragement and wanting work but not looking for it for at least a year.  Over the past 12 months, though, the AJSN, pre-pandemic, was more than 5.3 million lower.  The share of the AJSN from official unemployment dropped 0.4% and is now 44.5%.

How can we rate the February employment situation?  Given that our coronavirus progress has been so strong, a so-so economic month is no problem.  Progress on vaccinations has been real but too piecemeal, with most or many people receiving full doses in families with others who have not and thus unable to enjoy events freely with their primary group, for real economic advancement, and that shows in this morning’s results.  But our focus was well-chosen.  It may be several months before unemployment gets below 5.5%, or monthly net new jobs exceeds half a million, but as long as we do generally well with masks and social distancing, and keep increasing our vaccination rate, they will.  The turtle feels a lot better, and, accordingly, managed a full step forward.

Posted by James B. Huntington at 6:49 AM