It’s been an eventful three weeks.

To start with the good, according to the New York Times tracker, although the ski slope of Covid-19 infections has leveled off, on Wednesday we had a 7-day average of 68,123 new daily cases, down 73% from the January 10th peak.  The same average for daily deaths, 2,188, is off almost 35% from its high on January 12th, and average virus hospitalizations, now 57,306, is 56% lower than its summit that same date.  As of yesterday, 6.5% of Americans have been fully vaccinated, with another 7.5% having only one dose, putting us on a September pace for covering, say, 99% of people who want it.  Around the world, the United States had the 37th-highest per-capita 7-day average, an improvement over recent months, as follows: 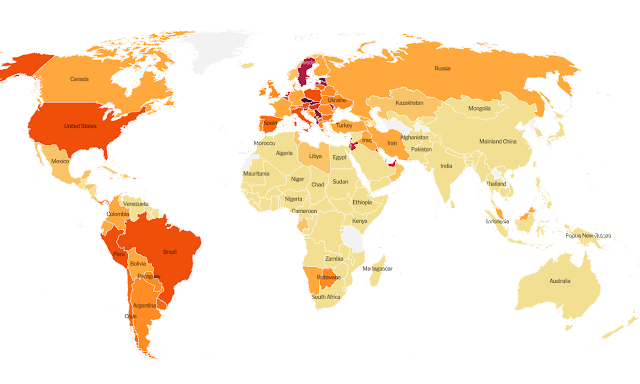 Our execution of President Joe Biden’s late-January strategy, though, has been lacking.  Is it true that, per the New York Times Editorial Board on February 7th, “We Know Very Little About America’s Vaccine Debacle,” including large numbers of doses being thrown away from lack of approved recipients?  The major problems are easy to see, though.  First is a lack of project management – there is no good reason why a detailed plan, missing only specific dates, could not have been put together in the summer and fall.  Such an effort would have needed ongoing revisions, as do almost all project plans, but would have been far more effective than what we have used.  With over one million active certified project managers, plus an unknown number of inactive ones including your correspondent, there is no excuse for not having enough people to develop and maintain such an effort.  Second is failure to acquire and commandeer resources all along the line, with a maximum number of rededicated factories, vaccination centers, places for people trained to administer doses, and facilities for extremely fast shipping, strange since from the beginning our home front World War II effort was often invoked for comparison.  Third is limitations on who can get leftover doses – it’s hard to see why, if they would otherwise be discarded, they cannot be offered on a standby basis to anyone needing them.

“We Asked 175 Pediatric Disease Experts if It Was Safe Enough to Open School,” said Claire Cain Miller, Margot Sanger-Katz, and Kevin Quealy in the February 11th New York Times.  The scientists “largely (my italics) agreed that it was safe enough for schools to be open to elementary students for full-time and in-person instruction now.” Good to see guidance here, but the air would have been clearer had they used a stronger word, and if letting small children crash into each other, with or without masks, did not seem so intuitively wrong.  The problem with deciding on school openings is that the interests of the two major forces, parents and teachers, are inherently opposed, with the former wanting their children back in classrooms and the latter wanting maximum safety and a higher vaccination priority than they have thus received.  The issue was also long politicized, with conservatives and Trumpists supporting faster reopenings, and there has been no lack of cases of infected children.  Accordingly, it seems teachers, whether believed safe or not, should not be required to work unvaccinated – and beyond that you and I do not know.

More beneficial news has taken the form of understanding what might happen with the pandemic from here.  On February 16th, per the next day’s “Covid-19 Live Updates:  Biden Suggests All Americans Could Be Offered Vaccines by August” in the Times, we may achieve just that.  Not guaranteed, but a good stake in the ground to tell us roughly where we stand – I project production of that many doses to be completed more like the end of August with second ones administered by mid-October, but that is closer than guessing instead this May or mid-2022.

This past Monday, Joe Pinsker in The Atlantic wrote “The Most Likely Timeline for Life to Return to Normal,” a longer view projection, which he summarized as “life this spring will not be substantially different from the past year; summer could, miraculously, be close to normal; and next fall and winter could bring either continued improvement or a moderate backslide, followed by a near-certain return to something like pre-pandemic life.”  Summer, though, will be much like now for people not yet fully vaccinated, and everyone will be in vastly better space once they are.  Contrary to someone Pinsker cited, people will not gradually phase back to their pre-pandemic lives but will often jump right into them, except for wearing a mask in public for politeness, as soon as they are safe.  All, otherwise, a plausible view.  Less so is Ross Douthat’s, in “The Covid Emergency Must End,” in the February 23rd New York Times, which presupposes an end to the organizational and logistical problems we have had to get “the era of emergency… over by the Fourth of July,” which would call for about 550 million more vaccine doses to be given in less than four and a half months.

How about employment?  Jed Kolko reported “The Jobs the Pandemic May Devastate” in the same place on February 22nd, a Bureau of Labor Statistics 2029 forecast with demand for epidemiologists and other medical scientists up over 20%, various computer-related spots (if employers still haven’t discovered that they can get foreigners for a fraction of domestic-workers’ cost) up around 10%, and waitstaff, restaurant hosts, bartenders, hotel desk clerks and the like down 13% or more.  The former are easy, but the latter presuppose lifestyle changes still unknown.

I would have ended here, but got, hot off the New York Times press, “The Coronavirus Is Plotting a Comeback.  Here’s Our Chance to Stop It for Good,” by Apoorva Mandavilli, published 6:30 yesterday evening.  After acknowledging that “the deadly curve of cases, hospitalizations and deaths” have never “plunged so steeply and so fast,” and “the two vaccines authorized in the United States are spectacularly effective” with implementation “picking up momentum,” she stated that, still, “the road back to normalcy is potholed with unknowns.”  Mandavilli was concerned with “a fourth wave,” people living less cautiously, and new Covid-19 strains, but, despite the title, had little advice other than to maintain distancing and step up vaccinations.  Yes, we’ll do those things – and hope.