January’s Jobs Report: A Bad Month, With AJSN Showing Latent Demand for Work Increased Over Half a Million to 21,800,000

This time, the net-new-nonfarm-jobs predictions went well.  I saw one projecting 50,000 in this morning’s Bureau of Labor Statistics Employment Situation Summary, and another 100,000.  The actual number was 49,000 – close – although seasonally adjusted unemployment fell from 6.7% to 6.3%.  But what was behind that?

In January, the month of BLS record, fewer people are usually working than in December.  That is why the number of unemployed was 10.1 million adjusted but 10.8 million unadjusted.  Other figures, not changed in this way, revealed mostly improvements:  2.7 million on temporary layoff instead of 3.0 million, still 4.0 million out for 27 weeks or longer, and 200,000 fewer, now 6.0 million, working part-time for economic reasons or maintaining short-hours positions while seeking full-time ones.  The two measures of how common it is for Americans to be working or one step away, the labor force participation rate and the employment-population ratio, were mixed, with the former down 0.1% to 61.4% and the latter up the same amount to 57.5%.  Average private nonfarm payroll earnings increased 15 cents from last month’s report, 9 cents of that from an adjustment, and are now $29.96, meaning that the lower-paying jobs were even more scarce.

The American Job Shortage Number or AJSN, the statistic showing how many new positions could be quickly filled if all knew they would be easy and routine to get, gained 559,000 as follows: 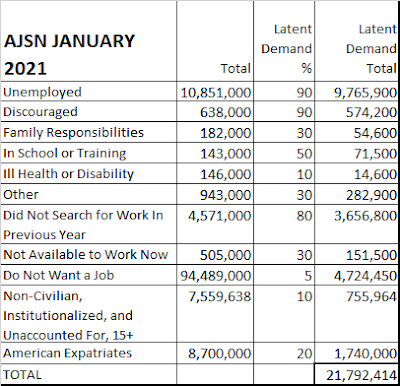 All but about 150,000 of the growth was from higher official joblessness.  Latent demand from those wanting to work but not looking for it for a year or more increased 270,000, meaning that the remaining categories, as a group, shrunk, headed by Other and those wanting a job but being temporarily unavailable for it.  The share of the AJSN from unemployment as such increased almost 1% to 44.9%.  Compared with pre-pandemic January 2020 the AJSN is 5.5 million higher, with over 90% of the difference from those officially jobless and those not pursuing it during the previous year, but the other categories contributing over 400,000 more.

Given that it was an unimpressive month for employment, with new work opportunities not covering population increase and ever more people on the sidelines, did we have offsetting progress with the pandemic?  No, not at all.  Per The New York Times, from December 16th to January 16th the 7-day average of new daily cases gained 6% from 211,008 to 224,499, the same for deaths soared 30% from 2,545 to 3,319, and the number of Covid-hospitalized Americans hiked 17% from 109,972 to 129,008.  Once again, despite the pandemic reaching its worst levels we went nowhere with jobs – let us hope that with more new positions, the virus would have been worse.  We have good news since then, so can expect much lower coronavirus levels matching the February jobs report, but for now the turtle is still reeling backwards.

Posted by James B. Huntington at 6:38 AM