Biden’s Stimulus Package – Good, Bad, Too Much, Not Enough, and Vastly Better Than Nothing

Two weeks ago yesterday the not-yet president proposed a $1.9 trillion effort aimed to help the American economy, and the people in it, recover from the pandemic’s effects.

A good stimulus should do two things.  First, it should help people, perhaps but not necessarily through organizations they need, avoid or mitigate life disasters.  Second, any money it provides for other reasons should be designed to come back, either through taxes or by cutting costs the federal government would otherwise accrue.  If all or almost all of its expense fits in one or both of these categories, it is worthwhile, nearly regardless of how much money is involved.

Using these standards, how does the proposal measure up?  Taking “A Look at What’s in Biden’s $1.9 Trillion Stimulus Plan” (Jeanna Smialek, The New York Times, January 14th), we see quite a mixed bag.

First, the scheme calls for “$1,400 per person for those under certain income thresholds, topping off the $600 checks” from December.  That would qualify under both points above if the income limit were low, but it is not.  Per Steven Rattner’s “Biden’s Relief Plan Is a Trojan Horse.  And I’m OK With That,” in the same publication on January 27th, at least part of this amount would go to people with annual family incomes as high as $310,000, “many middle and upper-middle-class Americans have been stashing money away at a ferocious rate,” and “merely putting cash into Americans’ pockets is not what’s needed for the overall economy.”  This line item would cost $465 billion, of which no more than half would be spent quickly.

Second on Smialek’s list, per Biden’s document, is ”a $400 per week unemployment insurance supplement to help hard-hit workers,” through the end of September.  That may be too high and too long, with more of the jobless getting well over what they were earning at work, and strong prospects for a summer economic boom.  This item is not as easy to algorithmically limit as the $1,400 checks, but if there were a way of thinning it out without causing great delays that should be done.

Next, Smialek mentioned payments to “kindergarten-to-eighth-grade” schools to enable them to reopen.  Even if all agree that would be safe enough to pursue, it is not clear why that would cost in the tens of billions, though some of that would return from taxes on higher incomes facilitated by not needing to supervise children at home.  Then her piece moved to the most controversial part, minimum wages to rise to $15 per hour.  That would not be immediate, and there was no timeline.  Per Veronique de Rugy’s January 21st Reason “Joe Biden’s Plan for Big Government,” that would also include an end to restaurants’ “tipped minimum wage,” which can be as little as around $2.50 per hour, causing more problems for an already crippled industry.  That pales, though, with the unsuitability of making broad-based increases to something with substantial local variation.  As shown in this map from “By the numbers:  The impact of the $15 minimum wage,” by Erica Pandey on January 20th in Axios, the “estimated real purchasing power” of $15 varies across the country’s metropolitan areas from $11-$12 (dark red) to $17-$20 (dark blue): 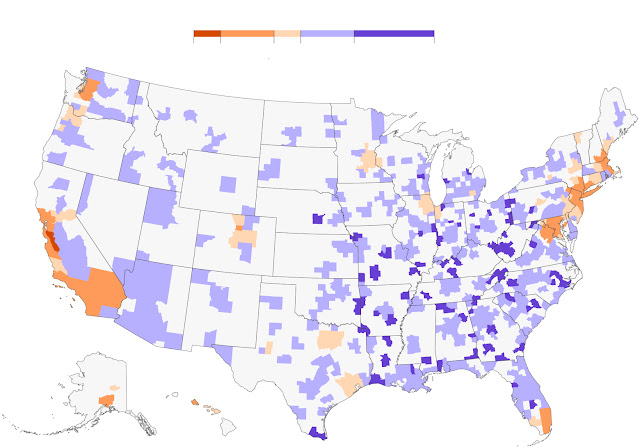 Other articles concurred, such as “Here’s how many jobs Biden’s proposed $15 minimum wage could kill, according to the Congressional Budget Office” by Lucas Manfredi in the January 18th Fox Business, which concluded “as many as 3.7 million.”  Since jobs going away helps neither people nor the economy, it has long been my bias to oppose minimum wage hikes, and here we do not have an exception.

As Smialek continued, the plan would contain $440 billion for “communities” including small businesses, excellent under the second standard above and valuable also for the first.  Mandating paid leave would help the people involved, if not the financial system, and providing refundable tax credits for parents may not be positive, as it duplicates other items here and encourages people to work when it is not safe.

That leaves, per Smialek, “$160 billion in funding for a national vaccination program, expanded testing, a public health jobs program and other steps meant to fight the virus.”  Although I have long thought of testing as being unresponsive to our situation, keeping vaccinations going is among our nation’s highest priorities.  I do not see why such spending has not been long before approved.

So, is the $1.9 trillion proposal good or bad?  As a rough cut it is certainly favorable.  There needs to be more debate on several of the items, while ensuring minimum vaccination delays.  But for now we must do something.  “Ready, fire, aim” can work for government as well as business, so if this is the best we have, let’s start.