The Coronavirus Status: Better, But Worse Than It Seems

As much as I want to focus on other issues, the pandemic has more effect on jobs and the economy than anything else.  It continues to change, so here we go again.

The leading indicator, whether it should be or not, the 7-day average of number of new United States cases, as of Thursday was 188,110, down a whopping 27% from its all-time peak 13 days before.  Daily deaths measured the same way were 3,078, off 8% from its 9-days-before historic high, and hospitalizations, which also crested on January 12th, now average 124,008 or 5% lower. 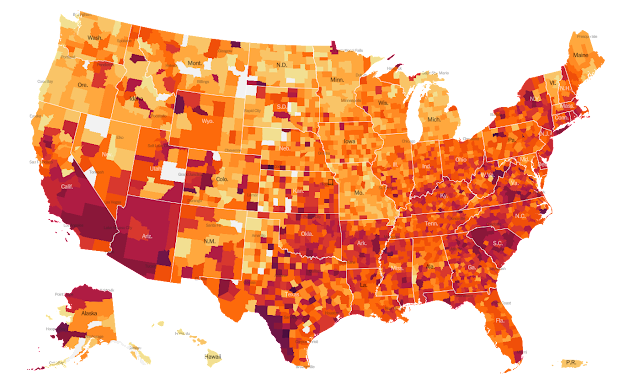 The angriest-looking areas have moved from the upper Midwest to California, Arizona, and South Carolina, with Oklahoma, parts of Texas, and New York state not far behind.  The light colors in the former Nynex area in the Northeast, seemingly reflecting better social distancing, are no longer consistent, and Wisconsin, infamous for high drinking and its concurrent gatherings, now does not stand out at all.

Another issue critical to track is vaccine distribution.  A national map in the January 20th New York Times showed little state-by-state difference – per the same publication and date “about 14.3 million people have received at least one dose of a Covid-19 vaccine” and “about 2.2 million people had been fully vaccinated.”  As reported in the January 19th USA Today, almost half of distributed doses, which per the January 20th Times were “about 36 million.”  The lack of overall project management is still scandalous, but we are making progress.

We know that the Pfizer and Moderna vaccines are the only ones approved for full United States use, but what it the status of the others?  As reported in the January 19th New York Times, eight more – products by Gamaleya, Oxford AstraZeneca, CanSino, Vector Institute, Sinopharm, Sinovac, Sinopharm-Wuhan, and Bharat Biotech – have been approved in some countries for at least emergency use, and 58 others are in various development stages.

Great further help is on the way, not only with vaccines but with the defensive struggle, as “Biden Unveils National Strategy That Trump Resisted” (Sheryl Gay Stolberg, The New York Times, January 21st), as now we have a president who calls his responsibility a “full-scale wartime effort” and says we are “still in a very serious situation.”  We now have a mask-wearing mandate on “interstate planes, trains and buses” along with “the creation of a national testing board and mandatory quarantines for international travelers arriving in the United States.”

Despite all that is positive, there remain real cautions.  One reason American pandemic numbers have improved is not only people getting vaccinated, but the estimated 1 in 15 who have already had the virus.  Factoring those things in, we are doing better than a week or two ago but not massively.  As before we should not confuse lower infection, death, and hospitalization rates with a safer country.  It is important for all of us to continue our precautions until we are fully protected – then, but only then, we can have those parties, go to large concerts and major sporting events, resume nightclub visits, and, for those without romantic partners, improve that situation.  In the meantime, watch this blog – I will keep you up to date.