The only projection I saw for the number of net new nonfarm payroll positions in this morning’s Bureau of Labor Statistics (BLS) Employment Situation Summary was plus 71,000, and it missed by more than 200,000.  The 140,000 loss was the first since April.

Fortunately, the other numbers did not consistently follow.  Seasonally adjusted and unadjusted unemployment stayed the same and gained 0.1%, to 6.7% and 6.5% respectively.  There are still 10.7 million Americans officially jobless.  The count of those on temporary layoff rose over 200,000 to 3.0 million, consistent with the 800,000-averaging weekly unemployment claims.  Those out for 27 weeks or longer edged up 100,000 to 4.0 million.  The two measures of how common it is for people to be working or one step away, the labor force participation rate and the employment-population ratio, did not suffer, with the former still 61.5% and the latter up 0.1% to 57.4%.  The number of those working part-time for economic reasons, or keeping less than full-time employment while looking for that with longer hours, surprisingly fell almost 500,000 and is now 6.2 million.  Average private nonfarm hourly earnings shot up 23 cents per hour, not a good sign since that means more lower-paid people are not working, and is now $29.81.

The American Job Shortage Number or AJSN, the metric showing how many people would work if getting a job were known to be as easy as buying a six-pack, increased for the first time in eight months, as follows: 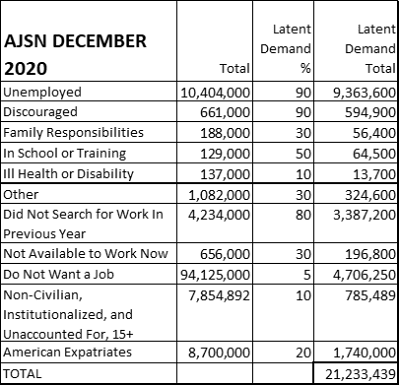 Almost half of the AJSN’s monthly gain was from higher official unemployment, with most of the rest from those not looking during the past year.  With the share of the AJSN from unemployment unchanged at 44.1%, rises in the other categories above kept pace with December’s job losses.  Do not be fooled into thinking that the count of those claiming no interest in working is permanent – it consistently decreases when more work opportunities become available.  Since a year ago, the AJSN has gained over 6.2 million, about 70% from increased official joblessness.

Overall, the picture is bleak.  We cannot blame the steady upward coronavirus march on too many people at work – with the population increase, the jobs loss had more effect than 140,000 – but we’re clearly doing plenty of things wrong as a nation.  However, relief from vaccinations, of which 4.5 million Americans have received their first of two doses and about 500,000 more join them each day, should help both employment and pandemic figures as soon as next month.  In the meantime, we still cannot afford to put jobs ahead of health.  Help is on the way, but this time the turtle staggered backwards once more.

Posted by James B. Huntington at 7:08 AM