We gained 390,000 net new nonfarm positions, reasonably near the two 325,000 projections I saw.  Seasonally adjusted unemployment did not reach the 3.5% some thought, but held at 3.6%, actually increasing a bit with the difference falling into rounding – the unadjusted figure gained 0.1% to 3.4%.  Other indicators were mixed.  The adjusted count of those officially jobless rose 100,000 to 6.0 million, with 43,000 fewer or 810,000 on temporary layoff, and the number in long-term unemployment, or out for 27 weeks or longer, 100,000 better at 1.4 million.  The two measures best showing how common it is for Americans to be working or one step away, the labor force participation rate and the employment-population ratio, were up 0.1% and unchanged respectively to reach 62.3% and 60.1%.  The count of those employed, 158.609 million, was up 631,000, and that of unemployed also gained, 90,000 to 5.548 million.  Those working part-time for economic reasons, or holding that sort of position while seeking a full-time one, jumped 300,000 to 4.3 million.  Average hourly private nonfarm payroll wages again lagged behind inflation, gaining 10 cents per hour to $31.95.

The American Job Shortage Number or AJSN, the metric showing how many currently unadvertised positions it would take to get one to each person who would grab it if they thought they were readily available, was up over 300,000 to reach the following: 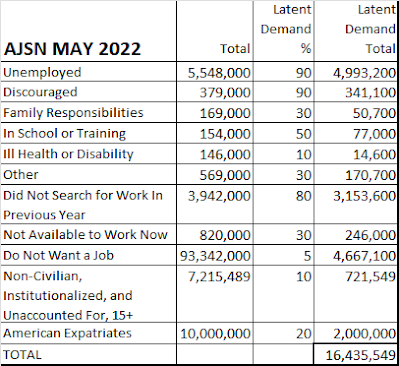 The areas in which the AJSN got worse were people not searching for work in the previous year (adding almost 400,000 to the total) and those officially unemployed, contributing 81,000.  Improving were the count of those not wanting a job, contributing 52,800 fewer than in April, and the “other” category, with 47,100 fewer.  The share of the AJSN from those officially unemployed was almost unchanged, down 0.1%, to 30.4%.  Compared with April 2021 the AJSN again showed a year of great improvement, 3.5 million lower, with all but half a million of the difference from official joblessness and most of the rest from fewer people not looking for a year or more.

So what happened here?  The statistics above are unanimous in showing that many people tried to go back to work, starting with a one-million decline in those claiming no interest, and while most got there many did not.  The gain in people employed, along with the robust net new jobs count which is still around ten times what we need for population growth, tell us that our economy is strongly expanding.  Latent demand increased as more people are looking.  We still have a problem with wages, and the main reason for not finding jobs, and the boost in those working part-time for economic reasons, may be that existing opportunities pay too little.  That’s why the numbers above, for the strong and improving times we are in, look messy.  Employers still need to evaluate the cost of leaving needed positions unfilled against that of paying more – as they realize that the latter will allow their sales, in an outstandingly high-demand time, to jump even more, which will also shut up the misguided people talking about a possible recession.  There’s no doubt that the bones of our employment situation are strong, so, accordingly, the turtle took another solid step forward.

Posted by James B. Huntington at 7:06 AM