These areas are all over the business news, and beyond.  Let’s clear the air.

First, inflation is high, but not atrocious, by historical standards.  The latest three months’ levels, 8.5% for March, 8.3% for April, and 8.6% for May, are not included here, but would easily fit on this chart: From “How inflation became a global problem” (Patricia Cohen, The New York Times, June 10th), we learn that its latest readings were 9.2% in the Netherlands, 5.3% in Australia, at “four-decade highs” in Germany and Great Britain, and over 10% in “seven eastern European nations.”  It’s not just us.

Second, on Wednesday afternoon the Federal Reserve raised the federal funds target rate by 0.75%, which, though the largest one-time boost in 28 years, only brings it to where it was just before Covid-19 became widespread, which was lower than it was from Nixon through Clinton:

Third, at over $5 a gallon, gasoline prices seem way high, but when adjusted for inflation are not obscene: 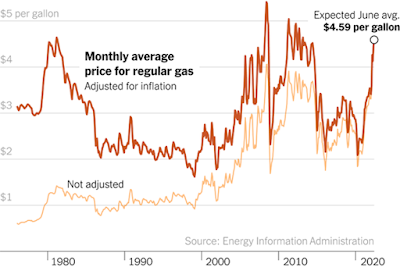 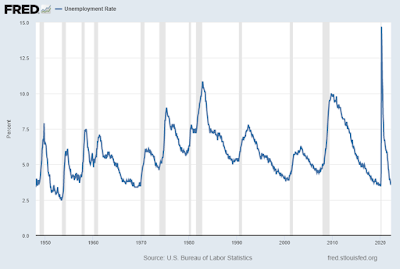 Beyond the statistics above, what is important to understand?

It is possible that interest rate hikes will not significantly shrink inflation.  That is because our current situation is due to “over-buoyant demand” (the view of the Organization for Economic Cooperation and Development, cited by Cohen above), from the pandemic’s slowing, and from relatively high household cash.  On the other hand, with deep job supplies such increases may not boost unemployment much either – indeed, per “Fed Takes Aggressive Action in Inflation Fight:  Live Updates,” by Jeanna Smialek in the June 15th New York Times, the Federal Reserve predicted joblessness, even with higher interest rates, would reach only 3.7% this year and 4.1% in the next.  In that case, the only thing we could do, without finding a way of wrenching tens of millions of jobs and trillion dollars of money away from Americans, would be to wait for demand to cool itself off.

As well, as addressed in “The Daily Money:  Why are gas prices so high?  Oil refineries never caught up after COVID” (Jayme Deerwester, USA Today, June 7th), and reflecting on the United States only producing 12% of world petroleum and Russian production being down in “Biden Has ‘Only Bad Options’ for Bringing Down Oil Prices” (Clifford Krauss, The New York Times, June 5th), we cannot do a lot.  However, as described in “Gasoline demand falters with average price on brink of $5/gallon” (Yahoo Finance, June 9th), “demand destruction,” in the form of people just plain driving less, is already in progress and can only exert downward price pressure.  Expect more, including lower per-mile consumption from consumer vehicle choices.

Overall, we are hardly in terrible shape.  Inflation and gas prices are high but understandable.  Interest rates remain historically tiny.  Today’s unemployment level would be the envy of any time from the 1970s through the 2010s, as virtually nobody wanting work needs to go without it.  Sometimes we can’t force things to change – we can nudge them, but that’s all.  Accept that, and we will all be happier.